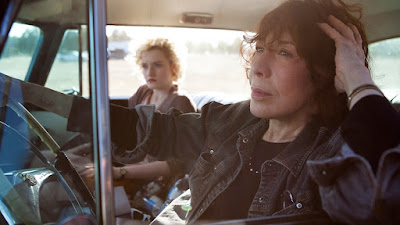 A teenage schoolgirl called Sage needs six hundred bucks for an abortion that evening. Scared of her mom she calls in on her grandma, a tough-talking writer with a mean tongue but a heart of gold. Problem is that grandma used all her cash paying her lover’s medical bills, setting the two women off on an all-day goose chase to put together the cash without, if at all possible, facing mom. Along the way we learn that maybe when Grandma was dumping her young girlfriend that morning, the mean things she said had more to do with grieving her forty year marriage. And maybe she wasn’t as confident in her sexuality as she is now. And maybe she didn’t always handle big life choices without hurting people. And maybe her daughter comes across as bossy and mean because she too is grieving. And maybe everything is going to be okay.

All of which makes this sounds like a trite relationship comedy but I promise you it isn’t. GRANDMA shows just how much character depth and development you can pack into 80 minutes of finely focussed cinema. Legendary comedienne Lily Tomlin quite literally packs a punch in the title role and is ably supported, particularly by Marcia Gay Harden as her daughter and Sam Elliott as her ex-husband. But really the star of this film is the script. Everyone who’s every known anyone who’s on a writing programme will laugh out loud when Grandma and her ex, Ophelia, throw insults at each other “Solipsistic!” “Writer in residence!” And it’s also to the credit of the screenwriter that the emotional and physical consequences are handled honestly, even within the context of a comedy.

It’s rare to a find a comedy that dares to be as dark as GRANDMA but that also makes you feel warm and fuzzy at the end. It’s even more rare to find one anchored almost entirely by strong female performances. Kudos to all involved in both making and programming this film.

GRANDMA has a running time of 79 minutes and is rated R. The movie played Sundance, Tribeca and London. It opened earlier this year in the USA and opens in Sweden on October 23rd, in Spain on November 20th and in the UK on December 11th.
Posted by Bina007 at 15:35