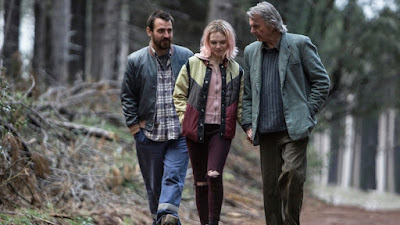 The strange thing about my reaction to THE DAUGHTER is that while I can see that it's superbly acted and well directed I just couldn't stand it.  I spent the whole film thinking it was derivative and predictable and obvious and I absolutely despised the final scene.

But let's wind back to the beginning.  The film is the directorial debut of theatre director Simon Stone and is essentially a modern day adaptation of Ibsen's The Wild Duck, set in contemporary Australia.  Geoffrey Rush plays a rich industrialist who's just laid off all his workers in a small lumber town, putting its very existence at risk. At the same time he's celebrating his marriage to a woman half his age.  His son Christian (Paul Schneider) turns up for the wedding and is evidently resentful not just at his father's happiness but also his childhood best friend Oliver (Ewen Leslie). Oliver may be poor and unemployed but he seemingly has a loving wife (Miranda Otto) and charming clever daughter Hedvig (Odessa Young).  By contrast, Christian is an alcoholic who's wife is in the process of leaving him.

And so, justifying his actions as a quest for truth, Christian sets about wrecking the happy family he sees before him and bringing this chamber drama to a climactic pitch of tears and violence.  All of which will be obvious to anyone who sees the massive foreshadowing about thirty minutes in, or familiar with Dogme cinema of the kind most brilliantly depicted in FESTEN.  And to be sure, this particular movie is very well acted, not least by the young actress who plays the daughter of the title.

But there's something all too predictable and, yes, even, safe about it, despite its claim to being radical and raw.  And, in fairness, it isn't Simon Stone's fault that THE DAUGHTER feels derivative of nordic Dogme movies because they are, after all, derivative of plays like The Wild Duck.  But, insofar as they spring from the same source, and we are very familiar with them, that's a problem because it undermines the tension that Stone is trying to create in its final act.  I suspect he's well aware of this, because he tries to create a twist in the final scene that's annoying in its pointless ambiguity.

So, this is a strange review.  I can see the quality in the component parts of this film and the raw emotion being cried out on screen but it just didn't move me, and maybe that's because I'm a cold-hearted bastard, but I think it's just because I've seen it done before, and in a genuinely more radical cinematic style.

THE DAUGHTER has a running time of 96 minutes. The movie played Sydney, Melbourne, Toronto, Venice and London 2015. It does not yet have a commercial release date.
Posted by Bina007 at 16:18