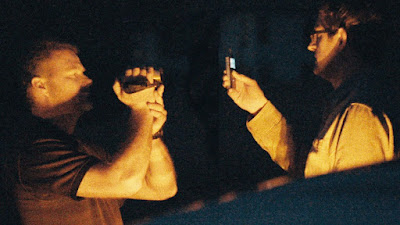 The past decade has seen the lid blown of the cult that is the so-called Church of Scientology thanks to the testimony of ex-members and many of the Church's ultra top secret documents, that you'd usually pay hundreds of thousands of dollars to learn, being posted online. In addition, in the past couple of years we have seen some important cinematic treatments of the Church, including Paul Thomas Anderson's powerful lightly fictionalised drama, THE MASTER, and Alex Gibney's HBO-funded doc, GOING CLEAR: SCIENTOLOGY AND THE PRISON OF BELIEF.  Both films exposed basic beliefs and psychological training drills as well as exploring the way in which ordinary people can get sucked into a prison of the mind, if not worse. No-one can now say that they weren't warned.

Writer-presenter Louis Theroux is the latest high profile journalist to investigate Scientology and in some ways his approach is the best calculated to expose its simultaneously sinister and absurd response to what it perceives are threats. Theroux has made countless documentaries in which his trademark deadpan humour, thick skin and ability to keep going until he provokes a response have combined to elicit insight or humour, and oftentimes both.  So when faced with a cult that has its members stalk him, prevent him from filming, bar him from public roads, Theroux's phlegmatic, superficially friendly and yet persistent response is absolutely the right approach.  As a result, some of the funniest and most powerful moments of this film are when the production team are filming the Scientologists who are filming them in return - both sides claiming they are unconcerned with being monitored by the other.

Where the documentary is darker, and arguably more insightful, is in showing Louis get close to ex scientologist Marty Rathbun, well known for his criticism of the Church's boss, David Miscavige.  Louis uses casting sessions and cinematic re-enactments of key moments of alleged abuse in the Church to show us, the audience, what he thinks it's all about, but also to start to investigate Rathbun's own complicity in its practices. Notably, Rathbun is reluctant to allow the discussion to go in that direction and it's a shame he wasn't pressed more, at least on screen.

Which brings me to my real criticism of the documentary, which is its soft-pedalling.  At one point, an ex-scientologists says of Marty Rathbun that he's not been totally open, and has been tip-toing around some of the stuff that went on in the 1990s.  "He knows where the bodies are buried."  And when Marty himself gets riled up when some harassers refer to his child, he makes statements to the effect that he's being playing fair so far, but now he's really going to bring Scientology down.

Well I'd argue that, at least on screen, Louis Theroux does exactly the same - he tiptoes around certain subjects that anyone who's followed this subject online will know about and want answers to. One wonders if that's because of legal issues, because Alex Gibney didn't go there either. But I would simply ask why Shelley Miscavige wasn't mentioned in either documentary?

The resulting film is, then, very funny, often insightful, but doesn't tell anyone who's watched the Alex Gibney film anything they don't already know.