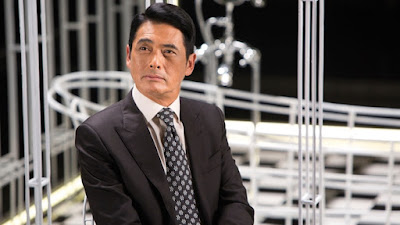 Here at the blog previously known as MOVIE REVIEWS FOR GREEDY CAPITALIST BASTARDS we greet every new film about our profession with bated breath and are usually disappointed.  MARGIN CALL is the only film that has truly depicted the reality of finance on the eve of the collapse of Lehman Brothers in 2008.  Sadly, Johnnie To's new 3D musical about Hong Kong high finance joins the long list of movies which, like that hack mess WALL STREET 2, have pretensions above their station.

This film has been adapted by legendary Hong Kong actress and writer Sylvia Chang from her stage play Design For Living.  But in bringing it to the screen this very much becomes a Johnnie To production. Which isn't to say it's full of bullets and action but that it is played on a scale and with a precision that is really impressive. To begin with, he's constructed a massive set that depicts the head quarters of the trading company at the heart of the film, but also the local bar where the office workers hang out, the apartments of the key players, and even the metro car that they come to work in.  There are no walls but lots of impressive neon structures and staircases complete with a giant clock in the centre.  Everyone can see everything and gossips about everyone, and yet there are secrets deep and dark.

Sadly, Johnnie To's stylish design and fluid camera can't detract from the  twin problems at the heart of this film. First of all, the musical numbers suck. The music is some kind of light rock-n-roll pastiche that you might hear in a hotel elevator and the singing not much better. There are no great melodies and no memorable lyrics, although I'm willing to concede that this might be down to an indifferent translator.  The lyrics merely describe the rather obvious and superficial emotions and plot rather than hinting at something more complex and profound.  And I have to say that this is true of the plot in general.

The basic idea is that Mr Ho (Chow Yun-Fat) owns a trading company that's run by CEO Madame Chang (Sylvia Chang).  She's sleeping with him but also flirting with CFO David, who's cooking the books with some stock market bets using the company balance sheet. Like all gamblers, he thinks he'll be able to sell out in time, but then the Global Financial Crisis happens and he can only sell at a loss. Meanwhile his deputy Sophie is wondering where the 2007 accounts are.  The second major plot is that Madame Chang has discovered that Mr Ho is going to stiff her out of her ownership rights when the company goes public and therefore its trying to broker a secret deal for a US cosmetics brand, despite its declining sales. And caught up in all this at the bottom rung is naive assistant Lee Xiang and the owner's daughter, masquerading as entry-level graduate, Kat.

All of this plot machination is played entirely on the surface and with zero subtlety.  Mrs Chang and Mr Ho are big fat evil capitalist bastards, CFO David is a simple-minded stock trader, and every relationship is either a sleazy affair or a naive coup de foudre.  The corporate politics is lifted out of Dynasty or Dallas in the 1980s. There's no real interest in the character motivations. Everyone is caught up in consumer fetishism but why not investigate the insecurity that binds everyone to that?

The resulting film looks great but sounds awful and quickly lost my interest despite its great pedigree. One to avoid.

OFFICE aka DESIGN FOR LIVING has a running time of 117 minutes.  The movie was released in China, Hong Kong and Singapore in September.
Posted by Bina007 at 16:18