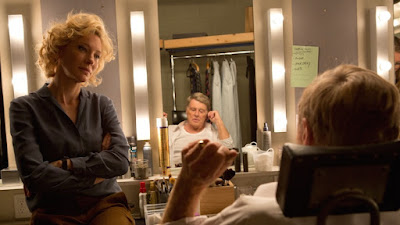 In 2004 legendary news anchor Dan Rather aired a report on his 60 Minutes news programme that accused President Bush of pulling strings to get a cushy domestic air force job during the Vietnam War and then not even bothering to fulfil that duty properly. This was at the time when his electoral opponent John Kerry was being accused of falsifying his Vietnam war record. The report, airing just before a Presidential election, was incendiary, and all the more so when the two documents upon which it was based were accused of being forgeries. In the end, the misreporting of the story cost Rather his job, and also that of Mary Mapes, the producer who put the story together.

Now I’d never heard of Mapes, or of this story, and only of Rather in some vague way, and certainly not the particulars of his resignation. Accordingly, all I know of this case is what writer-director James Vanderbilt has chosen to present me with. I think he wants to tell a tale in the manner of George Clooney’s GOOD NIGHT AND GOOD LUCK, or of Aaron Sorkin’s THE NEWSROOM, about crusading journalists out to expose the truth no matter what the discomfort to the powers that be. So, in that vein, he has many characters tells us again and again - at award dinners and in touching scenes of personal inspiration - how Dan Rather embodies all that that is right and good in integrity and the public trust. He does this is speeches that are very Sorkin-esque. Vanderbilt also paints Mary Mapes as a heroine - a woman beaten by her abusive father for daring to ask questions - and so per Vanderbilt, her psychology reduced to a father-daughter relationship with Rather. As the final music swells over the end credits, Vanderbilt tells us that Mapes’ work on exposing Abu Ghraib won a Peabody Award and that she hasn’t worked in TV since 2004. The space then hangs for us to fill in - what a tragedy - what an injustice!

Now I have no doubt that Rather and Mapes are motivated by the best of intentions and that their report was in good faith as presented here. But even here, presented as the heroes, as it was being constructed it all looked a bit slapdash to the untrained eye. I mean, when your document expert is being cut off and cut down for daring to ask about the sourcing of the document or raising queries about type face by your supposed heroine that does look bad. And although Mapes and Rather keep saying over and over that it isn’t about the document but about the abuse of power, well yes, but the document goes to prove that. You can’t just assert stuff, you have to prove it. That’s what journalism is, isn’t it?

I feel bad for all involved, but is Vanderbilt really doing Mapes any favours here? In a the big rousing speech she gives to her mean, nasty interrogators - the independent panel set up to investigate the claims but clearly loaded with right wing corporate interests - she is hoist by her own petard. She says the story is that so many of Texas’ spoiled rich kids got off going to Vietnam by going into the air guard. The guy asks her if any of them might just have gotten in on their merit. And she says no. People in the cinema ware clapping, but if you don’t even admit of a chance that just one of these guys got in of their own merit - not knowing them or their cases - isn’t that just prejudice?

Like I said, I don’t know anything about this case. I do think Bush probably got an easy ride because of who he was, and that is a story that should’ve been exposed, no matter what Viacom’s business with Congress. But per the evidence in this film, the investigative work done by Mapes didn’t prove that, and shouldn’t have been aired. Yes the questions should’ve been asked, but the answers had not bean adequately demonstrated.  Even worse, the fake documents became the story. Incompetence prevented the exposure of truth.

So what we have here is a very very weird film indeed that seeks to portray a woman as a heroine for creating a news report that was substantively right and sticking by it, except that the movie does not, to my mind, show that it was substantively proven. And that just undermines the whole exercise. Worst of all, it undermines the very concept that it is trying to defend - rigorous, unprejudiced, investigative journalism no matter how powerful the target. So with that major flaw of choice of subject matter, or just how it was shaped and presented, writer James Vanderbilt makes Cate Blanchett’s typically fine performance redundant.