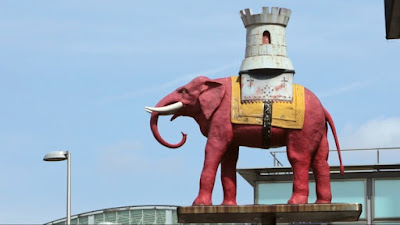 ELEPHANT DAYS is a documentary made by British indie band The Maccabees, about the recording of their fourth album "Marks to prove it" in a studio in Elephant and Castle - a famously desolate area just south of the river in Central London.  Evidently, the band feel a great affection for this area - as many parts of London with a rich and varied cultural heritage but after years of failed attempts at redevelopment now finally at risk of redevelopment.  Turning the camera on the local residents preserves a slice of life that I fear will come to an end once the council estates are knocked down and the rents go up. How long will the iconic Arments pie and mash shop last?  Will BB concrete church survive?  Directors James Caddick and James Cronin elegantly weave these quirky personal stories with the Maccabees haunting music and just like Frederick Wiseman's IN JACKSON HEIGHTS (also playing at the festival), this lends the film an elegiac feel. Both films are an important social document and fascinating purely on that level.  The only part of the film I found grating - and its ironic because without them it wouldn't have been made - are The Maccabees themselves - with their posh accents, and earnest attempts to build a community garden. Because like it or not, it's when the hipsters move in that gentrification happens. And so now that Shoreditch has become more expensive than Chelsea, the artists have moved south to Peckham and New Cross and Deptford and the price rises won't be far behind.

ELEPHANT DAYS has a running time of 83 minutes.  At the moment there are still tickets available for two out of the three screenings.
Posted by Bina007 at 20:00