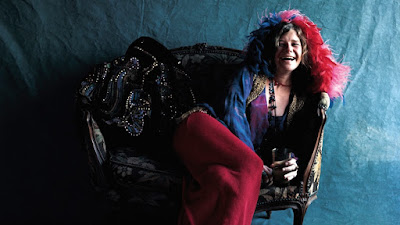 Oscar-nominated director Amy Berg (WEST OF MEMPHIS) is back at the London Film Festival with another great documentary - this time about the legendary blues singer, Janis Joplin.

I can still remember the first time I heard Janis Joplin when I had this whole 1960s counter-culture phase about five years ago and was trying to reconstruct the entire set-list from the Monterrey pop festival.  There was this insanely strong powerful voice fronting this big rock'n'roll blues band, and it was a woman, and she was singing these big old blues songs with an authenticity and control that was astounding.  That of course pretty quickly led me to Cheap Thrills, one of the all-time great music albums by her then band, Big Brother and The Holding Company. I was a mad proselytiser burning copies for people I knew.  So much of that whole 1960s festival scene is dated now, but that album still holds.

Janis is emblematic of that movement to me.  So much of the hopes and good that came out of it are embodied in her, as is the darkness and danger.  She grew up a middle class kid in a small town in Texas, too fat, too spotty, too plain, too creative, too strong, too opinionated to fit in.  No-one asks her to Prom.  When she argues for integration in a town with an active KKK chapter, she become a target.  There's some respite when she makes it to college in Austin, which apparently even then had a proper live music scene, but the bullying continues.  Hurtfully, she's voted Ugliest Male at college. And so, like so many other disaffected teenagers who didn't fit in, she left for San Francisco and for the first time in her life found freedom and artistic expression. She also finds heroin addiction. She joins Big Brother and the Holding Company and massive success, and that keeps her addiction within limits because the bandleader isn't a junkie. She leaves them and forms a new band - one that will hopefully be able to keep up with her - but the first attempt, the Kozmic Blues Band, is a flop, and she takes that to heart, and the drug use escalates. There are months of cleaning up, latterly inspired by maybe the first guy who really loved her, and by the end of the decade, she seems to be in a good place. But once the music stops, she's back on her own, dealing with her own loneliness and insecurities and hurt, and it was only a matter of time before she died. She did so in 1970, just sixteen days after Hendrix.

Amy Berg's documentary is a polished and balanced narrative, and she is lucky enough to get interviews with Janis' siblings, ex-lovers and band-mates. We see her art, hear her sing, and listen to her letters home to her family. Janis was so open, so unwilling to lie about her feelings, so charming, that you really feel you have a sense of her from the letters in particular. She comes across as uncompromising and honest, but overwhelmingly still raw and hurt from all those child-hood taunts.  And as her addiction continues, one can only resent the fact that no-one tried to step in.  Talk-show host Dick Cavett - who looked like a real square but evidently had a real fondness for, and relationship with, Janis - says he once asked her about giving up, and she answered "who would care?"  That's the tragedy of this film. Janis talks about live performance as a kind of reciprocal relationship between performer and audience - that it's about giving and receiving.  Janis gave us all so much and it's a tragedy that the love she got in return wasn't enough and couldn't offset the come-down after a performance and loneliness when she was offstage.

JANIS: LITTLE GIRL BLUE has a running time of 106 minutes. The movie played Venice and Toronto but does not yet have a commercial release date.
Posted by Bina007 at 16:36