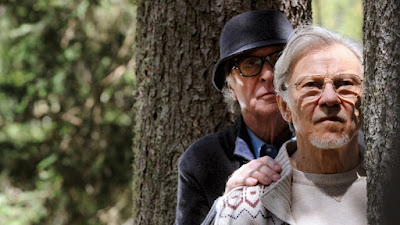 Oh man. Paolo Sorrentino’s IL DIVO is arguably the best movie I’ve ever watched at a film festival, and it’s the only one I loved so much I watched it twice. And his last movie, THE GREAT BEAUTY, was a work of magical visual beauty and deep melancholic investigation into ageing and art. So I came to his first ever English language film with great expectations. Expectations that were, with the exception of a few flashes of brilliance, disappointed. There are two over-riding reasons for this: first a chronic lack of narrative drive and energy; second, uneven tone that undermines rather than enhances the whole.


The entire movie takes place in a luxurious Swiss spa hotel where two ageing artists are staying. The first is a famous composer and conductor called Fred (Michael Caine). He is apparently widowed, with a grown daughter Leda (Rachel Weisz) who is staying with him and suffering a divorce but also enjoying a newfound and somewhat absurd flirtation. He is refusing to play his most famous piece for the Queen, and an actor staying at the resort (Paul Dano) believes it’s because he thinks it a minor work. Fred’s friend Mick (Harvey Keitel) is a famous movie director who’s staying at the resort with a team of young writers, putting the final touches to a screenplay he feels is his testament, and which will star a famous actress played by Jane Fonda.

The movie unfurls at what could be generously termed a leisurely pace, but more frankly a dull pace. Not much happens. We get the typical Paolo Sorrentino balletic, fluid camera, and carefully framed visually stunning tableaux, often featuring naked women and water. Fred and Mick muse on the trials of ageing and how their work will be interpreted. Paul Dano’s actor looks on with cynicism. Leda’s soon to be ex husband (Ed Stoppard) makes a quite bizarre cameo with the real life Paloma Faith in tow, who in turns out can’t act.

There are flashes of superb quality - like when Fred and Mick spy on a couple having sex against a tree, or when Paul Dano’s character comes down to breakfast in costume. And there are scenes of real emotion - like when Leda tells her father just how absent and cruel he was to her mother - or in the final scene. But the mood shifts so suddenly or is often played simultaneously and undercuts the whole. So, in the key emotional confrontation between Fred and Leda they are both lying covered in chocolate mud on a massage table. Sorrentino is obviously trying to something very brave and provocative here, and I can’t pinpoint exactly why it doesn’t work, but it doesn’t. By contrast, when Yorgos Lanthimos switches suddenly from black comedy to horror in THE LOBSTER, the sum of the parts enhances the whole.

And so we roll on into the final scenes of the film by which point I was utterly disengaged. I couldn’t be impressed by the profundity of the exploration of ageing when an impersonator of the Queen was on screen.

Sorrentino has thus created what I thought would be impossible for a man of his talent - a stinker.

YOUTH has a running time of 118 minutes.  The film played Cannes and Toronto and was released earlier this year in Italy, France, Lithuania, Poland and Germany. It is currently on release in Greece and will be released in the Netherlands on October 29th, in the USA on December 4th and in the UK on January 15th.
Posted by Bina007 at 23:00