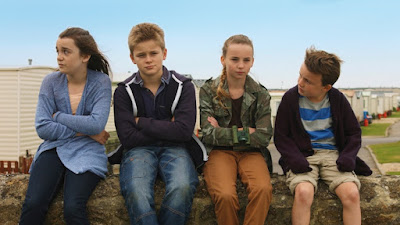 WHO KILLED NELSON NUTMEG is a delightful, witty children's movie in the best tradition of Scooby Doo and The Famous Five.  Five intrepid friends gather to investigate the mysterious disappearance of the original Nelson Nutmeg - mascot at their summer camp.  As is typically the case, that's only part of a wider mystery that the pesky kids uncover! Moreover, we have the suspicious baddie in the form of thuggish Mr Slug, and Bonnie Wright aka Mrs Harry Potter enjoying a turn as the apparently diabolical new camp manager Diane.  The kids themselves have the right balance of age and youth, cynicism and romanticism, as we'd expect in such an adventure. I like that the writers have given us an age range for pre-teen to teenager so that we can explore first crushes, and gatecrashing your first disco as well as still believing in the power of the imagination. The performances of the five lead children are universally good and while the dialogue can be a little wooden at times, it's all about remembering your own youth and how we all used to go on these insane madcap adventures over the slightest of things.  And it's a melancholy tale about growing up - not just for the kids but the adults too.

Behind the lens, the film is well made with a real visual and musical style.  I like the mock-horror design of the titles and the way in which the composer Titas Petrikis spoofs different movie genres for the horror scenes, the zany adventure scenes, and the teen romance scenes. The use of split screen to zoom in on apparently suspicious behaviour is cute and helps give the movie a zippy pace that kids will latch on to. All in all, a fun first feature and I'd happily watch these kids in a TV series spin-off or a sequel.

WHO KILLED NELSON NUTMEG? had its world premiere at the BFI London Film Festival 2015.
Posted by Bina007 at 08:17