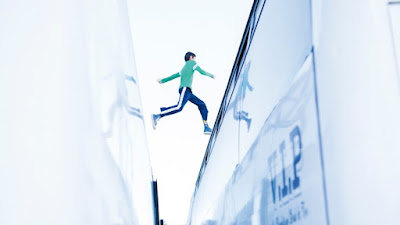 THE IDOL is a deeply moving straightforward biopic of Mohammad Assaf, a poor Palestinian kid from the Gaza Strip who defied many odds to travel to Cairo and audition for Arab Idol, eventually winning the competition and becoming a UN Ambassador.

Director Hany Abu-Assad (twice Oscar nominated for PARADISE NOW, OMAR) creates a perfect balance between a sentimental almost fairy-tale story and the harsh reality of life in a warzone.

The first half of the film sees Mohammad growing up with his sister Nour and their two friends. These wonderfully bright and endearing kids scrabble together enough money to buy instruments and start a band, playing at weddings and gaining a following. But a tragedy strikes and the band is dissolved - Mohammad stops singing and Omar becomes drawn into the resistance movement. The second half of the story picks up with Mohammad being inspired by a childhood friend to apply for Palestinian Star and then Arab Idol. The problem is the latter audition is in Cairo, and living in the Gaza Strip means he is prevented from travelling legally. But physically making it to the audition turns out to be the least of his problems, because once he’s on TV the pressure of representing an oppressed people, and a Cause, because almost too much to bear.


There’s no doubt that the director wants to create a fable or a fairy tale with this story but it’s testament to the acting and genuine camaraderie of the young kids in the first half of the film that we totally buy into their struggle and victories. But even then, we see through the kids eyes images of men who have lost limbs, bombed out buildings, smugglers dens and the mechanics of forging a visa. It’s even interesting to see how Mohammad’s sister has to perform behind a panel at weddings because of religious sensitivities. My only criticism of the film is that they have not translated the lyrics of the songs for a foreign audience. This would help explain why Mohammad’s impact was so great. The press notes tell us that one of his key songs was called ‘Raise your Keffieye’ – considered an unofficial Palestinian national anthem, which calls for the traditional Palestinian scarf to be raised as a sign of unity. But there’s no way of knowing that just from watching the film.

THE IDOL has a running time of 100 minutes.  The filmed played Toronto and London 2015 and does not yet have a commercial release date.
Posted by Bina007 at 22:05