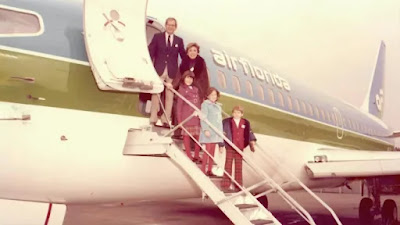 LAST FLIGHT HOME is a deeply moving documentary about a wonderful man and the love and strength within an ordinary family.  That man happens to be the father of documentarian Ondi Timoner. When we meet him he is bed-ridden with a poor quality of life, but his mind is still sharp. We learn that he was an incredibly successful businessman who founded and ran a regional airline and gave his family an affluent life, until a stroke left him partially paralysed.  The "T team" of mother and kids rallied round to give him the care he needed, but he clearly feels shame at not being able to provide for them after that, and for a being a burden on his beloved life. Much of this film is about him coming to terms with his life, releasing himself from any misplaced guilt, and truly seeing and hearing the wonderful love that surrounds him. In the words of his daughter, a Rabbi, "you were not perfect, but you were a good man". We really feel that in this film.
For the family, the  pain and sadness is in coming to terms with their father's decision to end his life rather than moving into residential care. Speaking from personal experience, they are incredibly fortunate to have end of life laws that allow a person, in specific circumstances, to commit euthanasia. It's so brave to show this on screen, but hopefully influential. We see Eli Timoner say good bye, receive love, dispense advice.  We see his kids and grandkids in such emotional pain but also able to release him for his last journey.  This is a film that is so moving I felt I was in the room with the family and was openly weeping as this man - thinking of others to the last - thinking of how to fix social injustice - passed away.
I cannot express how much I admire the entire Timoner family for allowing cameras into this most intimate experience - especially Eli Timoner. The result is a documentary that is so full of humanity and honesty that it is one of the most profoundly moving documentaries I have ever seen.
LAST FLIGHT HOME has a running time of 101 minutes It played Sundance and Telluride 2022 and is currently playing the BFI London Film Festival. It was released in the USA last week.
Posted by Bina007 at 09:08