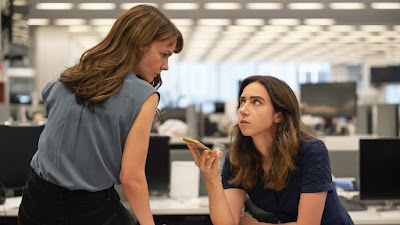 SHE SAID is a Tab A into Slot B journo-procedural that's basically a worthy TV movie.  It stars Zoe Kazan and Carey Mulligan as the real-life New York Times investigative reporters Jodi Kantor and Megan Twohey who broke the Harvey Weinstein scandal by convincing some of his victims to bravely go on the record.  This in turn helped trigger the Me Too movement.  Their story is clearly important, and this film straightforwardly shows the tenacity and courage - not to mention supportive husbands/fathers - needed expose a powerful rapist.
The question is whether a feature film is the right format to tell this story. Or whether THIS feature film made by this director and writer. My view is that Maria Schrader's direction is so workmanlike as to be banal, and uses a script from Rebecca Lenkiewicz that is faithful to the book, but is never gripping and doesn't move. In fact, the only truly moving part of the whole film is when they use actual real life audio of a very frightened young woman being goaded and harrassed by Harvey Weinstein into an entering a room with him even after he acknowledges that she feels uncomfortable that he touched her breast the day before. That is absolutely chilling and says more about this scandal than any re-enactment. Having seen it, I became convinced that this story would have been better told as a documentary.
As it is, we have a film that will educate those that did not read the original reporting or the book, and that has value I suppose. But this is NOT an award-worthy film except if virtue-signalling.  It's very much a made-for-TV film.
SHE SAID is rated R and has a running time of 128 minutes. It will be released in the USA on November 18th and in the UK on November 25th.
Posted by Bina007 at 09:46