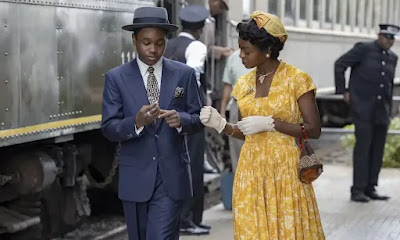 TILL is a handsome and earnest film that is beautifully produced, acted and lensed, but that feels so freighted by grief that it becomes almost hermetically sealed and strains at its two hour, ten minutes running time.  This is perhaps because we never know a time before grief. Even in the early scenes where Emmett Till (Jalyn Hill) and his mother (Danielle Deadwyler) are happily living in middle-class Chicago, she is on the verge of tears and paranoia that something is going to happen to her teenage son when he goes to Mississippi to visit his cousins.  The foreboding is so heavy and persistent it never lets daylight in on the family, and makes us wonder why on earth she sent him if she was that convinced her happy-go-lucky charming child was going to be met with racial violence. I am in no way blaming the character, to be clear, I am just saying that this is a film about grief from minute one. Maybe that's an accurate depiction of the black experience in 1955, or today for that matter, but it makes for a film that doesn't seem to progress. It's trapped in amber for its entire running time, and its characters are trapped with it, never evolving or progressing. Mamie Till-Mobley is a strong, weeping mother for the entire film.  Her family are supportive.  The activists and community who rally round her are fully formed and ready to spring into action.  They are all good, decent people. This is a film where the good are good and unchanging. The bad are bad and unchanging. Racism is unchanging.
So the conclusion I have come to is that this is not a feature film in the conventional sense that is dealing in the currency of plot and character development. Rather this is an event to which we bear witness. It is the literal open-casket viewing at a funeral. It must be viewed and judged in those terms, rather than as a conventional film, because it is so freighted in history that it rejects those terms.
We bear witness to the affluence of the post-war middle class black America of the northern cities.  We bear witness to the still insidious but more muted racism that pierces the affluence. We bear witness to black Americans moving out of the first class train carriages as they cross into the South. We bear witness to southern black America still picking cotton in the fields. We bear witness to Emmett Till's disfigured, mutilated body. We bear witness to a southern courtroom packed with white men in white shirts. We bear witness to the casual way in which the prosecution team dismisses Emmett Till's mum.
Bearing witness is of value, if a depressing reminder of the ages long struggle for civil rights, and this film provides a sombre historical lesson told with care and skill.
TILL has a running time of 130 minutes and is rated PG-13.  It was released in the USA this weekend and will be released in the UK on January 23rd.
Posted by Bina007 at 10:19