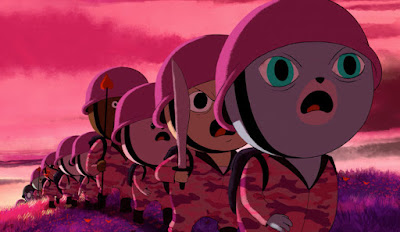 Alberto Vazquez' UNICORN WARS is essentially a one-gag film, but what a gag! Cuddly Care Bears-adjacent teddy bears are fighting a brutal war against innocent looking unicorns, inspired by religious zealoutry and the belief that the unicorns have stolen the Magic Forest. Conscripted into the army, poor Gordi has body image issues and a heart of gold.  But his twin brother Azulin, resentful at being born second, is a vainglorious pyschopath whose true nature is unleashed during an army expedition into the Heart of Darkness.  While Gordi makes friends with an injured unicorn and wants peace, a brutalised Azulin becomes a tool of the religio-fascist regime.
This is not your childhood's care bear animated series.  Vasquez makes that clear in the opening scenes that show a bear washing his balls and taking a piss.  There's a kind of infantile pleasure every time we see a bear doing something vile, like beating another bear up, or the iconic heart-design used in care bears bent to a more evil purpose.  There's also a more serious commentary on - I guess - the Spanish civil war, and every other example of religious nutters inspiring endless war and strife.  You could argue this film has the same subject matter as THE BANSHEES OF INISHERIN.  The most sinister character is the Catholic priest teddy bear who sends the cannon fodder teddies off to war, and watching Azulin eventually take his place as an icon of nihilistic violence.
All this takes place amidst animation that's genuinely beautiful to behold. Acid bright pinks and blues and greens - a stunning depiction of the magic forest, and a true understanding of colour and form.  I can't wait to discover more of Vasquez' work.
UNICORN WARS has a running time of 85 minutes and played the BFI London Film Festival.
Posted by Bina007 at 09:28