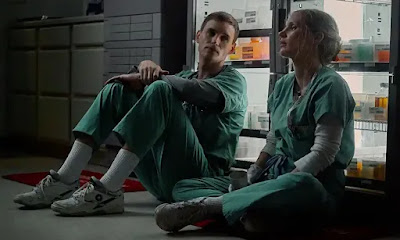 THE GOOD NURSE is a quietly brilliant investigative drama about the real-life prolific serial killer Charles Cullen. He was a nurse in New Jersey who probably murdered hundreds of patients by contaminated their IV bags. The good nurse of the title is Amy Loughren, who worked night shifts with Cullen, and helped bring him in despite struggling with severe illness, being a single mum, and the obstructions of yet another hospital's administrative team trying to palm Charlie off.
The result is a film that is focussed on Amy and her battles, in a screenplay of deep empathy and subtlety from Krysty Wilson-Cairns (1917, LAST NIGHT IN SOHO). It's also a film that focusses on the flaws in the hospital system that allowed Charlie to be detected - or at least suspicions raised - but for those hospitals to merely sack him and allow him to move on to his next set of victims. It reminded me of the Catholic Church, where sex offenders were knowingly moved on to new parishes rather than being dealt with openly for fear of (among other things) the legal and financial implications.
What we don't get from this film is Charles Cullen's life story. There is no attempt to explain why he became a prolific serial killer or what his motivation was. He remains a mystery.  That may irk some of the more sensationalist viewers, but it's the right angle I feel. It also echoed another recent Netflix film, SHE SAID, in not shying away from what it means to be a working mother, and focusing on the toll that child-rearing takes on professional women. This seems like a new and welcome trend.
I also love how the director, Tobias Lindholm, avoids any sensationalism in a film that exists in muted night-time tones of blue and grey, and where the actors barely speak above a whisper. The restraint that Lindholm shows reflects some of the ways in which he directed his episodes of the TV show Mindhunter, but with performances even more dialled down.  Jessica Chastain, fresh from her Oscar-winning larger-than life performance as Tammy Faye Baker, couldn't be smaller and quieter and gentler as Amy Loughren. And Eddie Redmayne is incredibly contained as Cullen, reminding me of his quiet and almost vanishing performance as a murderer in the seldom-watched and even less well-reviewed SAVAGE GRACE.  This makes the moment when Cullen does lose his temper in an interrogation room the more forceful.
The result is a film of slow but mounting dread and tension. A film that moves quietly and deftly to its conclusion, and provokes us to ask not what makes a serial killer, but what makes the system that protected him.
THE GOOD NURSE is rated R, has a running time of 121 minutes, played Toronto and the BFI London Film Festival, and was released on Netflix today.
Posted by Bina007 at 10:12