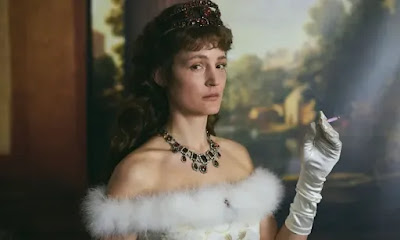 CORSAGE is a stunning piece of imaginative film-making from writer-director Marie Kreutzer, featuring a memorable performance from Vicky Krieps (THE PHANTOM THREAD) as the iconic Austro-Hungarian Empress Sisi.
Kreutzer's approach is to take a bold ahistorical approach to get to the emotional truth of an incredibly famous, beautiful woman, trapped in a loveless marriage and burdened by the obligations of her public role.  It is similar in approach - though bolder in its leaps of imagination - than Sofia Coppola's MARIE ANTOINETTE - far more successful than Pablo Larrain's hysterical SPENCER, though less honest in its treatment of Sisi's eating disorder.  The key difference is that in both of those movies, the central women were depicted as passive victims, whereas Krieps' Sisi is the architect of her own liberation.
The movie opens with Sisi about to turn 40 in 1870s Vienna, the mother of a teenage Crown Prince and a precocious and dutiful daughter. She is obsessed with her weight, skin and youth, starving herself and riding, fencing and doing gym exercises to maintain her figure. She doesn't want to have sex with her husband, but is also jealous of a young girl that he flirts with. At first we think she is in love with her riding instructor but then realises she just gets off on him (and her husband) looking at her adoringly. As with Princess Diana, we get the impression that she is both trapped by society's superficial and unreal expectations of her, but that she has also internalised these misogynistic expectations of beauty and turned into a narcissist. Certaintly, her treatment of her confidante and lady in waiting speaks to her putting her own happiness before that of all others.
The wonder of Krieps performance is that Sisi never seems passive or a victim even when she is: she's actually spiky, bitchy, rebellious and wild, to the point of neglecting her duties with her indulgent cousin Ludwig of Bavaria. She's also incredibly athletic and not lying when she says she's a better rider than her instructor. It helps that Kreutzer chooses not to show us the excesses of Sisi - her absurd hair and beauty regimen - her more waspish comments about fat people - her serial infidelities. This is a much less extreme and yet more extreme Sisi - less fat-shaming and more feminist -  one more palatable to contemporary tastes.
As to the rest of the film I love that Kreutzer shows us people in full costume dress with retinues of obsequious servants but places them in derelict locations filled with anachronistic props. It sounds too on the nose, but it actually works really well to underpin how rotten the edifice of the central European monarchy was at that stage, and the sham of these great imperial monarchs with their rotten teeth and fake beards.  Kreutzer's Sisi just takes that fakery one step further.
CORSAGE has a running time of 113 minutes. It played Cannes, where Vicky Krieps won an acting prize. It is playing in Official Competition at the BFI London Film Festival. It will be released in the USA on December 23rd and in the UK on December 24th.
Posted by Bina007 at 21:33