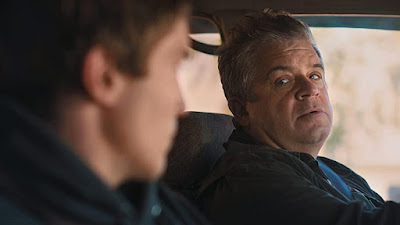 I LOVE MY DAD is an absolutely cracking dark-comedy directed with a deft hand by writer-actor-director James Morosini. It is based on his father's real life attempt to reconnect with him by catfishing him on Facebook.  In this fictionalised version Morosini plays Franklin as a shy, fragile but warm-hearted twenty-something who has just emerged from recovery after a suicide attempt and has blocked his flaky, serial liar father from his social media. So his dad, Chuck (Patton Oswalt) creates a Facebook account in the shape of Becca - a waitress he happend to meet at a diner - and befriends his own son, using the avatar to plea the case of his dad just trying his best and worthy of a second chance. The problem is that Franklin falls for Becca, and Chuck is unwilling to "dump" him because it's the one way he can actually talk to his son.
Morosini has a deft hand and cleverly decides to intersperse Chuck with Becca in frame with Franklin for maximum cringe. A four-way sexting chat where Chuck is using dialogue his actual girlfriend is sending him to turn on his own son in the guise of Becca is truly the most appalling, hilarious watch I've had all year. But the real skill in this film is keeping Chuck sympathetic even when he's doing terrible things. Thanks to Oswalt's natural amiability we always root for him, and believe he's genuinely trying to be a good dad. I was surprised at just how involved I was with both father and son, and how much I wanted their relationship to work. The final scene is a stunning payoff, and genuinely moving. This film really is a hidden gem.
I LOVE MY DAD is rated R and has a running time of 96 minutes. It played SXSW where it won the audience award. It was released in the USA on the internet in August.
Posted by Bina007 at 09:56