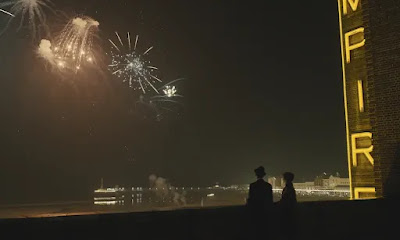 I'm not going to waste too much time on this review: I've already lost two hours of my life to this horrendously misjudged and borderline offensive film.  I believe writer-director Sam Mendes had earnest good intentions to make a film that explored mental health, racism and the healing power of the arts but he fails comprehensively.  This may be because he'd bitten off too much, or just because he has a tendency to the banal and twee in all his films.
On the mental health front we have Olivia Colman playing a middle-aged woman in a British seaside town in the early 80s. She works in a cinema, and the action of the film will take place among the people who work there. We soon discover that she has just come out of residential care for schizophrenia, and that she's in a pretty exploitative relationship with the cinema's manager (Colin Firth). All of this is good fodder for serious drama, but I can't emphasise how unreal, fake and performed Colman's character feels.  It's a rare mis-step, and maybe it's the writing because we know Colman is a great actor. But this feels to superficial and mishandled. To quote my husband, "do NOT get me started on the mental illness, which appeared to come and go entirely for the convenience of "the plot"."
On racism, we have the displeasure of Sam Mendes trying to tell us what it was like to be a young black man during the rise of the National Front in the character of Stephen (Micheal Ward).  And to add insult to weak writing, Mendes then proceeds to photograph Stephen as an object of desire (fair play I guess, it's from Colman's character's perspective), but the way in which we have a really extended shot of him naked, running into the ocean, made me feel uncomfortable with just how he was being objectified. To quote my husband once more, Mendes' handling of racism was "crass, simplistic and condescending and worse than GREEN BOOK by a long way."
Okay, so to the healing power of the arts, something that descriptions of this film make a big deal of.  The film may be set in a cinema, but it's no CINEMA PARADISO.  The films seem pretty incidental to the action, and the "healing power" consists of Colman's character asking to finally see a film in the final 10 minutes of the movie. It feels so cheap and tacked on and lazy. If you're going to use BEING THERE, then truly use it. And if you're going to cast Toby Jones as the projectionist, then give him something to do worthy of his talent.
In the words of my husband, EMPIRE OF LIGHT ends up as a "half-baked, pretty-looking mess. Deakins made it all look lovely though, and Mendes seemingly going for lots of Kubrickian symmetical framing with slow camera pushes. Edit to the right scenes (without people or dialogue) and you have a nice screensaver."
EMPIRE OF LIGHT is rated R and has a running time of 119 minutes. It played Toronto and Telluride 2022 and is playing the BFI London Film Festival. It will be released in the USA on December 9th and in the UK on January 13th 2023.
Posted by Bina007 at 10:13