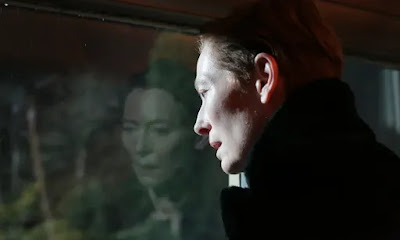 Joanna Hogg's THE ETERNAL DAUGHTER is a quietly powerful, emotionally devastating film that effectively continues the mother-daughter-film-maker triangle depicted in Hogg's previous films SOUVENIR parts one and two. Honor Byrne's young film-maker from those films has now grown up into Tilda Swinton's Julia and Tilda Swinton's Rosalind is now the more elderly mother of the film-maker. And of course, Julia is still a thinly veiled autobiographical expression of writer-director Joanna Hogg. And if you think that's all too meta, remember that Honor Byrne is Swinton's real life daughter.
Okay so back to THIS movie. It's late at night and a taxi pulls up to a country hotel wreathed in mist. My kind of horror film plays out: the surly lone receptionist can't find Julia's booking and makes a fuss about giving her a first floor room even though the hotel appears to be empty. Still she makes the best of making her mother, Rosalind, comfortable. The next day Julia struggles to work on her new script about her relationship with her mother, and seems to be hyper-sensitive to any discomfort her mother might feel. It emerges that Rosalind actually grew up in the house when she was taken in my her aunt during the Blitz.  And in successive visits over the decades, Rosalind's memories are sad as well as happy.
Rosalind seems to have that phlegmatic no-nonsense, self-effacing character of her generation, as epitomised by our late Queen. But Julia is so desperate for everything to be perfect for her mother that she breaks down at the slightest bump in the road. We realise that their relationship, while loving, does not in fact rest of mutual understanding and intimacy.
As for the rest of the plot I am not sure we needed it. The references to ghost stories, eery bumps in the night, amd self-proclaimed mystery seemed to me to cheapen the whole affair and provided very little actual suspense.
THE ETERNAL DAUGHTER is rated PG-13 and has a running time of 96 minutes.  It played Venice, Toronto and the BFI London Film Festival 2022.
Posted by Bina007 at 22:35