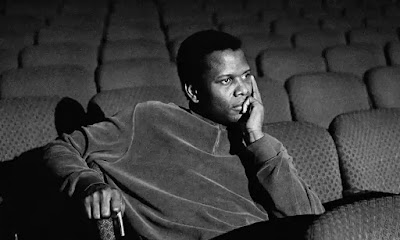 SIDNEY is a beautifully constructed documentary about the life and career of the iconic black actor Sidney Poitier, directed by Reginald Hudlin, produced by Oprah Winfrey, and featuring a candid and moving interview with Poitier himself in the year before he died.
The film begins with Poitier's childhood in West Indian poverty - he describes with relish the first time he saw a car in the capital, or the first time in New York he took the subway.  We also see him come to New York and work in a diner before realising he could take acting workshops and then join a local theatre group. His career is interwoven with that of his long-time friend and sparring partner Harry Belafonte. Poitier's big Hollywood break comes from taking a part that Belafonte passed over. But once he got that break he didn't look back, transforming small parts into mesmerising performances and radically challenging Hollywood ideals of male beauty and black power. He became a bankable headline actor in a period when black men were not accorded respect or civil rights. No-one who has ever seen it will forget Poitier slapping Rod Steiger in IN THE HEAT OF THE NIGHT.
In his personal life, we hear of Poitier's two marriages and many children. He seems to have taken the business of being a father and breadwinner seriously and it's moving to hear how he felt he couldn't go home until he had money, something that will resonate with a lot of migrants whose remittances are so important.
But clearly it's Poitier as activist who is of most interest to the contemporary audience and this film benefits from interviews with his contemporaries who were also active at that time - notably Belafonte but also Streisand and Redford. It's also fascinating to see how Poitier was outcompeted by later cinematic trends, most notably Blaxploitation, and was accused of being an assimilationist Uncle Tom by naive fools who had no appreciation for the context in which he was operating.
The best thing about documentaries like these is that they make you wonder how much has really changed.  One of the key provocative questions it sparked in me was how far Poitier would've become a star had he not had his break in the era of black and white film. It does rather feel as though colourism remains rife, and standards of black beauty still tend to be centred on "white" features. Think Beyonce or Will Smith's face, hair, colour. It makes you realise just how unique and strong and talented Poitier was to make it, for decades, in this industry.
SIDNEY is rated PG-13 and has a running time of 111 minutes. It played Toronto 2022 and was released on Apple TV.
Posted by Bina007 at 09:34