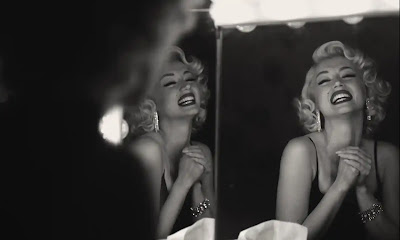 Andrew Dominik is a director of rare talent. THE ASSASSSINATION OF JESSE JAMES BY THE COWARD ROBERT FORD remains one of my all-time favourite films, and its worth considering BLONDE in that context. Because as with that film, BLONDE is about exploring the reality behind an avatar, a myth, an icon, and about trying to find some kind of emotional truth in a story that everyone thinks they know.
It is also worth stating, given some of the criticism that has been levelled at this film, that neither the film nor the book by Joyce Carol Oates upon which it is based, are meant to be straight biographies. Oates states very clearly in her prologue that if you want a factual, historic book about Marilyn Monroe, then this isn't what Blonde provides. Instead, she and Dominik are creating broad categories of experience, inspired by the known facts, and partly by speculation, to interrogate the myth of Marilyn Monroe and the lived emotional experience of what it could have been like to be Norma Jeane. If you approach both the book and film from that perspective, you will reap dividends.
The film is faithful to the book but adds something further thanks to a sensitive, vulnerable, brave performance from Ana De Armas as Norma Jeane, and Dominik's deep knowledge of, and visual invention around Monroe's iconic films, looks and performances. There's a moment where we see Armas' character in tears facing herself in a mirror and putting on the megawatt smile of Marilyn. It's a masterclass in acting the part of a woman who feels alienated from her own creation. Behind the lens, Dominik's use of black and white versus colour and different shooting techniques adds to the impression of a woman so divorced from her own image that the centre cannot and does not hold.
We begin with Norma Jeane's horrific childhood in Hollywood - at first at the hands of a mentally ill mother, then in and out of foster homes, and escaping early into a marriage. We then fast forward to Marilyn in Hollywood, a pin-up star who is raped by Mr Z at her first audition. This movie does not shy away from the sexual empowerment of Norma Jeane and the sexual exploitation of Marilyn Monroe. She isn't always a victim. She chooses her first polyamorous relationship and her two marriages. She also chooses to leave The Former Sports Star (Bobby Cannavale) when he beats her. And in her professional life, as in that aforementioned scene, Norma Jeane is able to put on Marilyn the character for her own financial advantage and is also able to out argue The Writer about his plays. We see her negotiating pay with her agent. Norma Jeane has agency and control.
But as Marilyn, she is serially exploited on and off screen, by producers who rape her, directors who condescend to her, and finally by the President who rapes her, then aborts her child. This last flight of imagination is the most controversial in reviews of the film, but I feel gets to the emotional truth of how the inspiration for The President treated the women in his life, and how powerful men treated Marilyn. Did JFK actually knock her up then abort the baby? I have no idea. What this film is saying is something truthful about power-relationships then and now. I also found it painful to watch how graphic the scene with the President was, but it felt it was absolutely right to show it that way. The film shows the reality of sexual exploitation. It does't cut away. But it also doesn't frame it in a way that is fetishising the actor's body. It focuses on her face, her reactions, her internal monologue as she's experiencing the abuse. How can you tell a truthful story about this woman without showing that?
As you can tell, I both really admired this film and got really frustrated by the reactions to it. I feel that people aren't judging it on its own terms but as something that it isn't: a truthful by the numbers biopic. And in doing so, they are missing out on a vital, provocative and incredibly well-acted account of a woman who attempted to wrestle Hollywood to the floor and got stomped on in the process.
BLONDE has a running time of 166 minutes and is streaming on Netflix.
Posted by Bina007 at 10:27