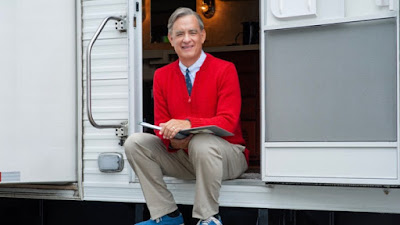 I don't think Marielle Heller's A BEAUTIFUL DAY IN THE NEIGHBOURHOOD is a well-made film.  The script, from Micah Fitzerman-Blue and Noah Harpster, doesn't seem to know how to get the movie started.  It feels like we get two or three starts.  And then it's full of cliches - like a hard-boiled news editor that kicks her star writer's self-pity with angry curses.  The biggest cliche of all is the cynical broken man (journalist Lloyd Vogel) being healed by a manic pixelates dream girl, sorry a hooker with a heart of gold, sorry, a beloved children's TV show host!  Everything else about the film is mediocre.  The cinematography is weak - look at the night shots outside of the hospital that just aren't lit properly.    There's nothing visually imaginative about the film in terms of framing or sound design. Honestly, the only vaguely interesting things are the animated versions of New York and Pittsburgh inspired by the Mr Rogers show.

For all that, this is a strangely effective film.  Rather than giving us a conventional biopic of Mr Rogers (as in the fantastic documentary WON'T YOU BE MY NEIGHBOR) what we are shown is the impact Mr Rogers had on people.  Lloyd Vogel is thus a stand-in for us, the post-modern cynical audience.  Vogel tries to find an angle on Mr Rogers but there isn't one to be found. He really is a very patient, kind, caring, thoughtful man.  He's also impervious to cynicism. And as we see him repair Lloyd's broken relationship with his father, we too ponder those imperfect and painful relationships of our own, and long for the wisdom and care of Mr Rogers in our own lives.  It's no surprise that I cried at this film, and that the three people I watched it with also cried. None of knew Mr Rogers from our own British childhoods, but his message of compassion, kindness and care were meaningful.

To that end, A BEAUTIFUL DAY IN THE NEIGHBORHOOD is almost the inverse of Pablo Larrain's EMA.  The latter was a beautifully made film about an awful person that left me cold. The former is a mediocre film about at outstanding character that moved me deeply.

A BEAUTIFUL DAY IN THE NEIGHBORHOOD has a running time of 107 minutes. It played Toronto and London 2019. It will be released in the USA on November 22nd and in the UK on December 6th.
Posted by Bina007 at 10:18