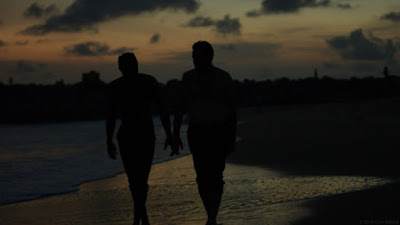 WALKING WITH SHADOWS is a fascinating film set in contemporary Nigeria about what happens when an apparently happily married man is outed as gay. The man in question is Ebele/Adrian (Ozzy Agu). He realised he was gay and had an affair as a younger man but also realised he risked losing his family and status if he pursued it. So he gets married and has kids, and suppresses his feelings until his wife receives an anonymous phone call.  It's interesting seeing how Adrian copes, but I was far more interested in his wife Ada's reaction. Perhaps in England one's first reaction wouldn't be to get an HIV test, but apparently that seems a credible threat in Nigeria. In the most fascinating scene of all, the wife is invited to lunch with a group of polished and poised women. At first we wonder if she's going to be mocked and excoriated because of the gossip circling the town. But no, it turns out they're all married to gay men, and have come to terms with being so, because at least they are still financially supported. The resulting film is moving, relatively well acted and shot but most of all of interest as a social portrait of queer acceptance, or lack thereof in Nigeria.

WALKING WITH SHADOWS has a running time of 90 minutes. It does not yet have a commercial release date.
Posted by Bina007 at 23:30