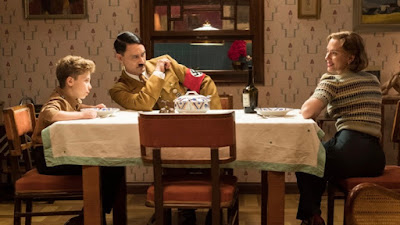 JOJO RABBIT is an absolute triumph - trust the people who voted it People's Choice at Toronto! Don't listen to the critics who are so scared of laughing first at what is, after all, a rightly difficult subject.  Because JOJO RABBIT is not just an hilariously brilliant satire on mass hysteria and fanaticism. It's also a deeply moving film that doesn't shy away from showing us the consequences of racism and totalitarianism, even while giving us hope that sheer human compassion will ultimately prevail.

The conceit of the film is that young Jojo (Roman Griffin Davis) is a ten year old boy who has been indoctrinated by the Nazis and is so fanatically devoted to Hitler (Taika Waititi) that he imagines him to be his imaginary friend.  Meanwhile Jojo's wonderfully funny but straightforward mother (Scarlett Johansson) doesn't hesitate to criticise "Shitler" and forces Jojo to see the consequences of his actions, all the while loving him. When Jojo gets injured at his Hitler Youth summer camp, run by the brilliantly funny but ultimately much more profound Captain K (Sam Rockwell) he has to spend his days at home, and it's there that he discovers his mum is hiding a teenage Jewish girl (Thomasin McKenzie) in the attic. And so we discover what happens when an indoctrinated boy faces an actual human being that he has learned to hate.

I went into the film expecting a black comedy in the vein of THE PRODUCERS and it is one of the funniest films I've seen in years. The physical comedy of Rockwell and Rebel Wilson - even Alfie Allen in almost wordless role.  Stephen Merchant as a Gestapo officer with his goons Heil Hiterling away. And most of all Taika Waititi as Hitler, delusional and jealous of Jojo's new friendship.

But what makes this film great is its subtle intelligence and profound humanity.  Take for example the opening credits using a German-language Beatles track over archive footage of Hitler Youth screaming for their Fuhrer.  This beautifully makes a point about mass hysteria and how easily crowds can be led. It also contrasts with beautifully with a German-language Bowie track at the end, the ultimate icon of individuality and nonconformity.

Or take the example of Waititi's Hitler - largely goofy but in one point of anger ranting and raving as the Fuhrer did when he worked himself  up in a hysterical fit - and it's genuinely and rightly scary. When Waititi as director wants to pack a punch he does - a pivotal scene is absolutely breathtakingly painful to endure. And Waititi also knows when to misdirect, making us think one character is in danger when another is.  Or take the altogether subtle moment when a joke about mass Heil-Hitlering becomes morbid and desperate because a Jewish girl has to force herself to do it.  And finally consider the responsibility of Waititi in not allowing us to turn our heads from the horror of war and genocide - and the fact that all hilarity aside, we are shown and told of the gravity of the situation.

For me, JOJO RABBIT is a success because it so beautifully finds the balance between satire and profound emotion - because it never shies away from its responsibilities in tackling the subject matter, while also allowing us to triumph over evil through laughter. The film tells us twice that to dance is to be free, and to express our joy and hope and happiness. I think laughing does much the same. I am reminded of that brilliant youtube meme that rebus a clip from THE DOWNFALL, with Hitler losing his shit that a Polynesian Jew is playing him in a film.  I laugh because I am free to laugh. In the words of Jojo, "Fuck you, Hitler."