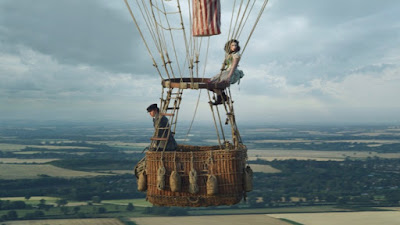 Despite my cynicism at another of those classy awards-bait earnest turns from Eddie Redmayne and Felicity Jones, I am overjoyed to report that THE AERONAUTS is an absolutely captivating film, with characters that I deeply cared about, stunning visuals, and a wonderful message.  In these dark times, it's just so refreshing to have a film that's all about how science benefits humanity, and that it's worth risking your life for.  It's also refreshing to have a film featuring a strong female lead who doesn't confirm to society's misogynistic template of where she should find fulfilment and happiness. A couple of times I feared the film might want to give us a schmaltzy Hollywood ending but it resisted.  Science is enough! We don't need hokey romance.

So what's it all about? THE AERONAUTS is based on the memoirs of the real-life meteorologist James Glaisher, who in the 1860s flew a hot air balloon to 37,000 feet, breaking by far the previous record, and gathering all sorts of useful and wondrous scientific data.  In real life, he did it with a co-pilot who was male, but the film posits that his pilot was a female - Amelia Wren, who had flown with her now deceased husband Pierre.  In this version of events, while Glaisher (Redmayne) is a keen scientist, he lacks practical experience and very much needs Amelia's help.  Amelia (Jones) is a talented pilot but also a pragmatic entertainer.  She realises that she almost has to be a circus performer entertaining the crowd.  Throughout their journey, it's Amelia who is in control, both technically and emotionally. And this really is her story more than James'.

I really loved how the aeronautical experiment takes place in real time, with the height and time passed showed in a graph on screen. The production design, including this device, is all stunningly beautiful, and the cinematography and vis-effects are wondrous, and never feel fake.  The film really filled me with the excitement of being above the cloud line, I was alive to every twist and turn, and felt the excitement of every challenge.

THE AERONAUTS has a running time of 101 minutes, and played Toronto, Telluride and London 2019. It will be released in the UK on November 6th and in the USA on December 6th.
Posted by Bina007 at 12:44