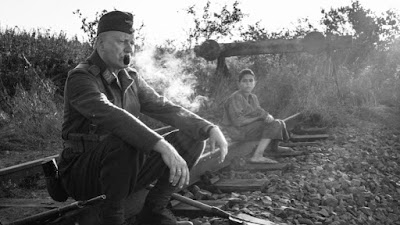 Writer-director Václav Marhoul has created, in THE PAINTED BIRD, the first undeniable masterpiece of this year's BFI London Film Festival. It's a film of rare courage and stunning cinematography. I couldn't write this review last night. I had to sit to sit with the film for a while. And even now I feel somewhat incapable of describing how I feel about it other than to say that it is unique, powerful, unflinching, and devastating.  Every scene feels so deliberately and carefully shot. The black and white photography so stunning. And yet the content is so brutal.

The movie is based on the novel by Jerzy Kosinski.  You might have heard of him as the man who wrote the novel upon which Peter Sellars stunning BEING THERE was based. However, before that, he was a literary sensation in America, thanks largely to this book.  When he published it he claimed they were his memoirs of being a small abandoned Jewish boy trying to survive the Holocaust in Central Europe. However, he was exposed as a liar. His book was made up of episodes taken from other works published in Polish but unavailable in the West.  Despite this, many of his early supporters, including Elie Wiesel, continued to support him after he was exposed, because his book contained an essential and controversial truth:  that while the Holocaust was perpetrated by the Nazis, the peasants of central Europe were no less anti-semitic and violent. This is also something that comes across powerfully in Claude Lanzmann's  SHOAH.  Of course, making this point today is very contentious. Poland recently passed a law making it illegal to accuse the Polish of being complicit in the Holocaust. One wonders whether this film will be released there, or indeed in Hungary and Ukraine.

Anyway, all this so much context to what is a brutal but also beautiful film about the worst of humanity. It depicts central European peasants living in World War Two but effectively in circumstances unchanged since the Middle Ages. It's a harsh rural life without electricity or cars or running water.  Intellectually these people are riddled with superstition and prejudice. They indulge at minimum in anti-Semitic brutality. At worst in incest, bestiality and child sex abuse. The Catholic priest (Harvey Keitel) offers platitudes but throws our poor protagonist into the most severe danger (Julian Sands), knowingly, in a harsh analogy to the current child sex abuse scandals.  What kindness the boy experiences is fleeting. A Nazi soldier lets him flee in a deeply moving and enigmatic performance by Stellan Skarsgard. Later, two Soviet soldiers take him under their wing - again a deeply moving performance from Barry Pepper.  In general, it almost feels like the men with guns are at least better to him because they operate according to some kind of rules, whereas the peasants are just living in some kind of wild west brutality that's beyond reason.

THE PAINTED BIRD has had a lot of attention because of some people walking out of screenings because of the graphic scenes of violence, and indeed sexual violence. And yes that's tough, but it's endurable. The far more emotionally difficult segment is at the end, seeing this innocent boy turned murderer because he has been so brutalised by events. The final scene, of a boy etching his name into the frost, is by far the most perilous to watch.

THE PAINTED BIRD has a running time of 169 minutes.  The film played Venice, Toronto and London 2019. It does not yet have a commercial release date.  For those who want to know more about Kosinski check out James Park Sloan's superb biography.
Posted by Bina007 at 22:03