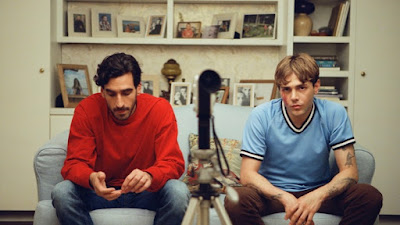 MATTHIAS ET MAXIME starts of with such joyous energy that one feels the immediate intimacy and zaniness of an old bunch of schoolfriends. The banter, the in jokes, the casual intimacy is all there.  And despite the almost constant gaggle of overlapping conversation, one soon gets a real feeling for the characters, each friend essayed so superbly and concisely. From Frank's easy FAST TIMES AT RIDGEMONT HIGH baked confidence - to Rivette taking on the MC role, directing all activities as well as playing chorus.  There's Matthias (Gabriel D’Almeida Freitas), who seems to have shit together more than the others.  He's on the fast track at his law firm and he's the only one who apparently has a serious girlfriend.   And finally, there's Maxime, played by the writer-director-editor-costumier Xavier Dolan. Babyfaced, quieter, browbeaten by his abusive, addict mother (MOMMY's Anne Dorval), desperate to escape to a gap year in Australia.

The events of the film are set in motion by Rivette's hilariously annoying wannabe Valley Girl sister Erika, who's making a parlous student film and ropes in Matthias and Maxime.  Sharing a kiss on screen prompts an identity crisis in Matthias, who turns cruel in his denial, devastating poor Maxime.  The emotional consequences of this unravel over the next ninety minutes.

MATTHIAS ET MAXIME shares the best and worst characteristics of all Dolan's films. At their best, they give us insight into the LGBTQ experience in a way that feels authentic and raw and moves us deeply.  They give us precise visual coding, and an obsession with dated, faded suburban interiors. They give us gloriously choreographed set-pieces and 80s synth-pop.  They feel like Sirkian melodramas made contemporary and thrilling.  But they also tend to the indulgent, with sagging overlong third acts, and plots that are rather predictable. On the whole, I can overlook the faults, because Dolan does something so particular and unique, and simply never fails to move me. The picture he paints of a loving, self-sacrificing son is just heart-breaking.  And I love the ambiguity of the ending. Moreover, this is one of the most joyous and laugh out loud funny of Dolan's film, especially in the breathtakingly good opening thirty minutes, with Erika stealing the show!

MATTHIAS & MAXIME has a running time of 119 minutes. The film played Cannes and London 2019 and does not yet have a commercial release date.
Posted by Bina007 at 23:37