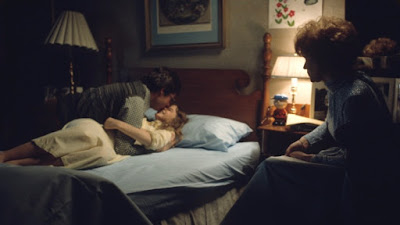 Director Alexandre O Philippe seems to specialise in documentaries about iconic movies and the technical choices and consequences of how they were made. The last film of his that I watched and thoroughly enjoyed was 78/52, about the iconic shower scene in PSYCHO.  In that film he had a multiplicity of contemporary film-makers comment on what makes it technically so compelling.  In his latest film, Philippe interviews William Friedkin about the making of THE EXORCIST and the result is insightful but claustrophobic.  It's really interesting to hear Friedkin discuss what he decided to keep and reject from Bill Blatty's novel - the importance of the Iraqi prequel -and how much care he took over capturing the light and the natural soundscape of the bazaar and the archaeological dig. I also came away with a profound respect for Friedkin's knowledge of classical music, and his clear sense that he wanted a subtle sound-track, rejecting a more bombastic score from Lalo Schiffrin, and his friendship in the process! Most of all, I had no idea that Friedkin was so passionate about fine art - particularly Caravaggio, the Dutch masters and the impressionists. This documentary neatly shows how certain shots in THE EXORCIST are framed and lit to mimic Rembrandt. We also get a lot of discussion about how Friedkin cast Jason Miller as Father Karas, despite already having another actor on contract.

What's surprising is that Friedkin doesn't discuss the casting of the little girl or the morality of asking her to perform such disturbing scenes. It's also surprising that he's so confused as to the meaning of the pivotal final scene of the film. And on both of these points, and more generally, I felt this film could have benefited enormously from other voices - other film-makers or historians to put Friedkin's comments in context. Without that, the film became, sad to say, a bit claustrophobic and ultimately tedious.

LEAP OF FAITH has a running time of 104 minutes. The film played Venice and London 2019 and does not yet have a commercial release date.
Posted by Bina007 at 08:18