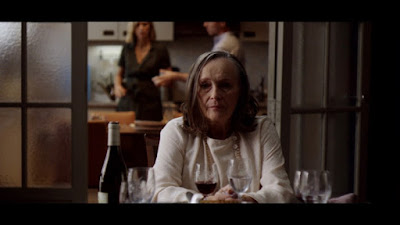 TWO OF US isn't the showiest or flashiest film in this year's London Film Festival but is has to be one of the most beautifully acted, cleverly constructed and deeply moving. It's all the more impressive as it's director Filippo Meneghetti debut feature, and displays a lot of subtle style. Take for example his use of camera shots through peepholes in doors - or the way in which he uses a subtle flashback/dream sequence at the start - or the sound design around an overheating frying pan as a woman lies in a stroke on the floor, hidden from view. This is a confident director who knows how to frame a shot and stage a scene.

The film centres of Madeleine and Nina, two old women who have been in love and together for 20 years. The only problem is that Madeleine cannot find the courage to tell her grown children, especially the son who blames her for not loving his father enough. So the women maintain two apartments, across the hallway from each other.  One is empty, and one is their home.  But the kids think that Nina is just their mother's neighbour and friend.

This charade is blown out of the water when Madeleine has a stroke, and is then brought home with a carer. She slowly restores mobility but cannot speak.  Poor Nina finds herself cut out of Madeleine's life, and indeed her home.  Increasingly frustrated she tries everything she can to insinuate herself back into Mado's life, and when the kids suspect, to track down Mado in her nursing home.  Even more moving, we see the strength of love, and how a severely restricted Mado struggles to physically find Nina and be with the woman she loves.

The resulting film is wonderfully observed and deeply affecting. I absolutely believed in the strength of Mado and Nina's love, and in the uncomprehending anger of the children. Martine Chevallier is superb as Mado but this is really  Barbara Sukowa’s film. Her Nina can be tender, angry, clever, defeated - but always, always in love.  There's nothing more beautiful and sympathetic than that.