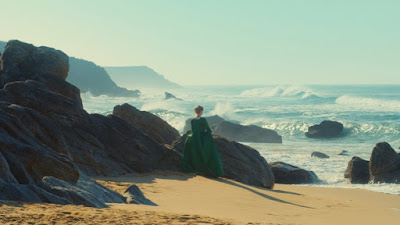 Writer-director Céline Sciamma has been creating beautifully acted, intimate portraits of female friendships since WATERLILIES, which was also the first movie in which I saw, and was impressed by, Adele Haenel. In her latest film she gives us another film by women, about women.  Set in the 18th century, it stars Noemie Merlant as a portrait painter called Marianne, commissioned by a Countess (Valeria Golino) to capture the likeness of her daughter Heloise (Adele Haenel). The only problem is that the likeness must be captured in secret: Heloise doesn't want her portrait to be painted as it will be sent to her future husband in Milan.  So the two women start to go for walks, and over the first hour of the film form an uneasy friendship.  It's only when the Countess leaves for five days in the second hour of the film that their closeness can be expressed as love.  But this is not just the story of a life-defining week of love. Huge kudos also to Luàna Bajrami playing the servant girl Sophie, trying to get rid of an unwanted pregnancy using old wives' herbal remedies and finally a backstreet abortion.

This is a film with very little interest in men. Apart from a sailor or servant at the start and end of the film, they rarely feature.  Rather this is a film about the impact that men have on women, and the spaces they try to create for themselves to provide support, friendship and love. The Countess is imprisoned in a deserted manor house, desperate to return to her beloved Milan.  Heloise is being forced into an arranged marriage. Marianne cannot fulfil her promise as a painter because the Academy won't allow her to paint male nudes and so learn anatomy, or submit pictures in her own name. And Sophie has to take increasingly desperate steps to not fall victim of her own biology.

As a result, the hinge of the film is a deeply evocative scene half way through the movie, where our three heroines go to a kind of women's meeting on a heath. As they sing and dance around a fire at night, it almost feels like a kind of witches coven - but in the best kind of way. It's a place where women can bond, have fun, let loose, express emotions they had kept suppressed, and seek. The result in a deliberately paced, evocative, intimate film about women viewing women, loving them, supporting them, and daring to snatch moments of happiness within the constraints of the patriarchy.

PORTRAIT OF A LADY ON FIRE has a running time of 119 minutes. It played Cannes where it won the Queer Palm and Best Screenplay.  It also played Telluride, Toronto and London. It opens in the USA on December 6th. It does not yet have a commercial release date in the UK.
Posted by Bina007 at 21:26