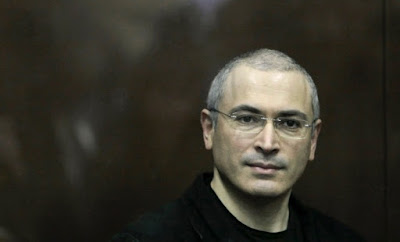 Acclaimed documentarian Alex Gibney returns to the festival with his film about Putin's transformation of Russia from flawed fragile democracy into authoritarian state as seen through the lens of his persecution of oligarch Mikhail Khodorkovsky. As one would expect from Gibney we get a meticulously organised  and compelling story that starts, as it should, with the fall of the Soviet Union in the early 1990s and the wild west capitalist period that saw a handful of visionary and ruthless businessmen buy state assets at a steal. This is not hagiography  - Gibney rightly shows Khodorkovsky and the other oligarchs to have been single-minded acquirers of wealth, who themselves manipulated the election of Yeltsin and then his successor Putin, thinking they could control him as a guarantor of their wealth. Of course, they utterly underestimated Putin, who never got over the collapse of the Soviet Union and has sought to essentially recreate its control over its citizens and its sphere of influence. He set about systematically seizing their assets, chasing them out of Russia, and if they didn't shut up in exile, having them murdered.

The problem was Khodorkovsky. He didn't leave Russia. He didn't shut up. Put on various show trials he was imprisoned for a decade and only freed when Putin needed good PR during the Sochi Olympics. The implication of his continued political activity is clear - he will probably end up being murdered in London too. And tragically, it feels as if he's not having much impact anyway. The "political theatre" in Russia continues - Putin's rule seems secure and even his presidential opponents are curated by him to perform in the charade of a free election

My criticisms of this documentary are twofold. First of all, I didn't really get a sense of what motivates Citizen K. Is he outraged at Putin and a passionate believer in democracy? Or is he just pissed off someone took his money? Even after a lot of interview footage I really didn't get a clear take.  Second, if you've followed this story at all, there's nothing new in this film.  That said, it is well organised and concise so if you were coming to the issue with no prior knowledge it would make an excellent primer.

CITIZEN K has a running time of 128 minutes. The film played Venice and London 2019 but does not yet have a commercial release date.
Posted by Bina007 at 09:21