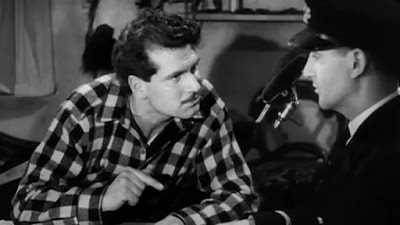 49th PARALLEL aka THE INVADERS is a fascinating piece of British propaganda from 1941, with a deeply nuanced view of World War Two, but ultimately arguing for the US to enter the war. It was created by the iconic pairing of Michael Powell (director) and Emeric Pressburger (writer) who went on to create masterpieces like THE RED SHOES.  Behind the lens, we have a young David Lean as editor and DP Freddie Young, both of whom would go on to collaborate on LAWRENCE OF ARABIA. And on screen, we have Laurence Olivier with a laughable Quebecois accent, as well as Leslie Howard (GONE WITH THE WIND) and the legendary Anton Walbrook.

The plot is radical insofar as it centres the narrative on a handful of Nazi submariners who come ashore in Canada and have to journey incognito to the US which is still neutral. On the way, they meet Olivier's Quebecois trapper who doesn't even know the war has started, and posits the radical idea that all men must have some goodness inside of them, for he wouldn't shoot Polish women and children. That said, as propaganda, the film is careful to show him as saying his loyalty is to Canada and thus Britain, not to France, as an ally of Germany.

As the film goes on, the Nazis take shelter with a kind of German emigre mormon community, and one of them starts to question what they are doing, which again feels radical for a propaganda film and reflects all the nuance and humanity that Pressburger (an "enemy alien" - ludicrous - in Britain at the time). But as these things go, naturally the Nazis must come to a bad end, and show the valiance of the Canadians along the way. This is most eloquently and powerfully displayed in Anton Walbrook's monologue roughly half-way through the film, where he explains why immigrants left famine and persecution in Europe and came to Canada for peace, security, tolerance and freedom. It remains incredibly stirring stuff.

It's equally impressive to consider how this film was made - partly funded by the UK taxpayer - filmed on location in Canada when travel was both restricted and dangerous - with an international cast of major talent, often working at half scale or donating their fees to charity. Freddy Young's black and white photography is superb and most of all, we have a score by Ralph Vaughan Williams. It is no surprise that this film was a huge commercial success, and apparently remains once of the highest grossing British film in the US of all time.

49th PARALLEL was released in 1941 and won the Oscar for Best Original Screenplay.