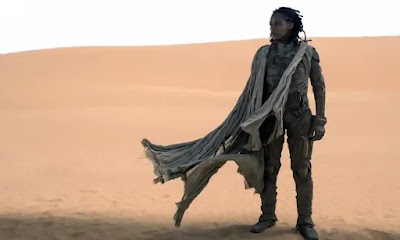 Frank Herbert's iconic ecological sci-fi/fantasy series, Dune, begins its first book with our hero, a young aristocrat called Paul Atreides, being yanked off his luscious home planet to travel with his family to an arid desert planet called Arrakis. The evil Emperor has lured them there with the promise of Arrakis' riches - the ability to mine "spice" - a drug that makes interplanetary travel possible. Really, the Emperor is jealous of Paul's father's charismatic power and is backing House Atreides rivals, the Harkonnens.  But Paul's father feels he can mount a challenge if he can form an alliance with Arrakis' indigenous population of Fremen....
Dune is notoriously unfilmable and yet it feels like every film-maker who read it as a teenager or somehow got their hands on Jodo's epic designs (see Frank Pavich's superb documentary JODOROWSKY'S DUNE) has somehow filmed it without acknowledging it openly.  To read Dune is to realise how much everything from Star Wars to Game of Thrones has borrowed heavily from its tale of political infighting, inter-galactic warfare, and mystic religiosity. This means that anyone who ACTUALLY films Dune risks looking like they're ripping off later works who themselves ripped off Dune.  (Tatooine, Saarlaks and the Force anyone?!)  And then there's the terrifying experience of David Lynch in the mid-80s, creating a Dune that was a commercial failure, where he didn't have final edit, and where despite flashes of design brilliance the whole thing feels like a pantomime ghoulish mess. (See my DVD commentary here).
So it takes a real fanboy to have the balls to actually film Dune, and that fanboy is Denis Villeneuve, most famous for his superb sci-fi film ARRIVAL and the recent  moody but unnecessary BLADE RUNNER sequel. It tells you a lot that despite his commercial track record, the studio was not willing to finance both films that would've covered book one of the series, wanting to wait and see if part one actually found an audience.  Hollywood scars run long and deep.
Villeneuve's DUNE is, I am relieved and happy to say, a visual and aural triumph.  From his creation of Caladan in the Norwegian fjords, to his stunning depiction of shifting sands in Arrakis, this is a film-maker with a keen sensibility who leaves us with instantly iconic scenes.  I also really loved his design aesthetic - with beautifully rendered space-ships and palace interiors and ornithopters that actually look like flying insects.  Where Lynch leaned into the grotesquery of Baron Harkonnen, Villeneuve realises that what lives in our minds when we read a book can look absurd when visualised on screen, and so he uses that character sparingly and in a very pared down design. Indeed, all the costumes and make-up feel sleek and and as modern as possible. Finally, behind the lens, Hans Zimmer's score is another triumph, and I am unsurprised to learn that he's another fanboy.
The acting is by and large fine - with Charlotte Rampling's Bene Genesserit Reverend Mother the standout cameo. Timothee Chalamet - well he looks young enough as Paul - almost pre-pubescent - but it's just another Chalamet role where he plays a brooding kid.  He has zero range - or at least no range that I've seen. Let's see if he can actually look like a leader as and when the next film is made.  Javier Bardem is fun as Stilgar, but we see very little of him.  Where I started to have problems was the use of humour in the film. Herbert's book is really dour and unfunny and the insertion of a couple of deliberately funny scenes around Josh Brolin's Gurney Halleck sat awkwardly with the film's overall tone. And then there was the problem of the audience i watched this with laughing at Zendaya's Chani as she mocked Paul.  And again, given that she needs to take a much larger role in any sequel, that may prove a big problem.
Overall, my feeling is that I enjoyed being in Villeneuve's world and fanboys will be happy that setpieces such as the fight with Jamis make the cut. BUT - BUT - I did find myself looking at my watch a lot.  It's a really weird decision not to film the whole book and because of that not much actually happens, there's no real narrative drive, and it's all just set-up. That's fine for me - I'll happily wait for another film, but is a mainstream audience going to wait? And if not, is this film going to make enough money to warrant a sequel?
DUNE is rated PG-13 and has a running time of 155 minutes.  DUNE played Venice and Toronto 2021 and opens in the UK on October 21st and in the USA on October 22nd.
Posted by Bina007 at 08:40