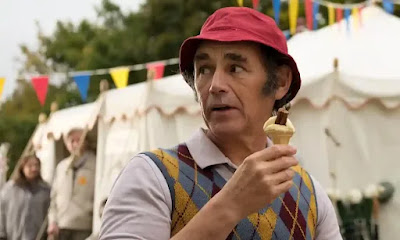 THE PHANTOM OF THE OPEN is the latest in a long line of heart-warming but slightly cheesy British comedies set in the post industrial decline of Britain in the 1970s and 1980s - think BRASSED OFF and THE FULL MONTY. In each one, a factory or a mine or a shipbuilding yard is undergoing mass redundancies or full on closures leaving its working class men out of jobs and searching for something to rebuild their self-esteem.
This film features Mark Rylance as the real life Maurice Flitcroft, who decides to take up golf when redundancy looms.  He can't afford the clothes or clubs so his best mate nicks them for him. And he can't afford the membership fees for the golf course so sons raise money by, I kid you not, disco-dancing. And when the snobs at the local club still won't let him in, he practises in local parks, local beaches, and even on the golf course, breaking in at night. Finally, he enters the British Open. Of course, he isn't good enough, so his supportive wife just ticks the box that says "professional".  When Flitcroft predictably fails, he gets a lot of media attention which embarrasses the tournament's officials, but is absolutely undeterred. And that's what makes this film so funny and so cheering. As Flitcroft explains to Seve Ballesteros - failure is just something to learn from! And "practice is the road to perfection".
There's something contagious and irresistible about Mark Rylance's cheerfulness and Sally Hawkins loving support.  Everyone loves an underdog, and seeing Flitcroft's sons pop into dance moves on the 18th hole is just joyous. And yes, there might be moments of doubt and embarrassment, but in the end this is simply a story of good decent people having a but of fun and poking the eye of the snobs. I laughed out loud throughout the film, and even shed at a tear at a well-earned emotional payoff. There's nothing not to love about it.
THE PHANTOM OF THE OPEN has a running time of 102 minutes. It does not yet have a commercial release date.
Posted by Bina007 at 09:11