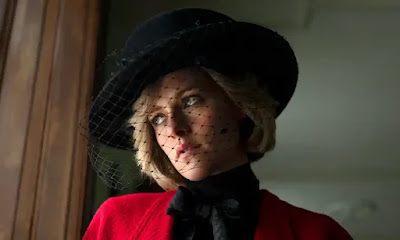 No film by Pablo Larrain can be a complete disaster. He's just too bloody talented. And his tale of Princess Diana's final Christmas inside the Royal Family is beautifully shot by DP Claire Mathon (PORTRAIT OF A LADY ON FIRE) in a manner reminiscent of Barry Lyndon - ethereal misty cool landscapes and warmly luscious interiors hiding a gothic horror. The framing is deliberate and intense - close-ups of Diana's quivering face - tracking shots that move with her in and out of rooms in which she is alienated and trapped -  tableaux held for longer than is comfortable.  Moreover, Larrain's film is scored by Jonny Greenwood (THERE WILL BE BLOOD) in glorious eclectic discordant cool jazz, classical piano and 80s pop kitsch, contributing to one of the most impressively intricate sound designs I've heard in years.

In front of the lens, the supporting cast is strong throughout. I particularly loved Timothy Spall as a kind of austere Danvers-ish equerry who allows Larrain to show the full froideur of the institution, without actually having a go at Her Maj or Pricne Charles (Stella Gonet and Jack Farthing - used very sparingly indeed). And in the title role, this film hosts a career-best performance from Kristen Stewart, whose fragility and vulnerability is used to devastating effect. As a portrait of a woman suffering from a nervous breakdown, bulimia, suicidal ideation and paranoid delusion, it's a heartbreaking and powerful film.

But for me, as a film about Diana Spencer, this film is a failure.  And that is predominantly because of choices made by Larrain and screenwriter Steven Knight (the pisspoor SERENITY).  I found their screenplay heavy-handed to the point of absurdity.  In an opening sequence, Diana is lost. Lost! "Where am I?" she asks bewildered peasants. Where is she indeed. "Do you think they will kill me?"  Whatever can you mean?! Throughout the film she has visions of Anne Boleyn. A cheap trick made even cheaper by a sequence where we see Diana in full tudor kit running through the house. And curiously miscast since Anne Boleyn was most famously the "other woman" rather than the "wronged woman" - in other words, more Camilla than Diana. And then the mawkish near final scene, where Diana's beloved dresser (Sally Hawkins - so talented she almost sells it) leaves her a note saying "it's not just me that loves you".  This film hangs heavy with portents of Diana's death and the mass hysteria that followed.

It's also odd to have Diana hanker after her childhood home as a safe place full of memories of dancing and laughter and sun-dappled gardens.  Diana had a notoriously miserable childhood, with a mother who abandoned her and a father who then remarried someone Diana painted as a wicked stepmother.  And far from being a boarded up gothic manor, the house was very much alive, being renovated by her stepmother in the bourgeois comfort that Diana claims to crave in this film, but decried in real life.

Finally, when contemplating this film compared to Larrain's magisterial JACKIE I wondered if the problem was simply that Diana isn't as interesting as Jackie Kennedy. She was basically a fragile, pretty, but rather thick woman who was almost perfectly incompatible with the institution she married into. It's a sad bad marriage but nothing more. By contrast, in JACKIE we have REAL narrative tension and REAL history being made. Jackie is a smart manipulative woman who wants to create the first draft of history as the myth of Camelot in opposition to the new LBJ White House and then Billy Crudup's journalist. There is no real narrative tension in DIANA.  Just a woman trapped for a 2 hour running time, looking beautiful and skewered.

SPENCER is rated R and has a running time of 111 minutes. SPENCER played Venice, Telluride, Toronto and the BFI London Film Festival. It will be released in the USA and UK on November 5th.