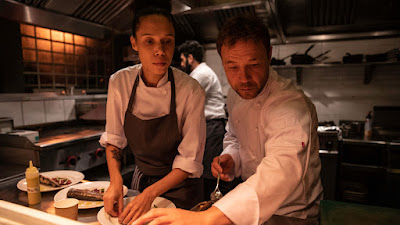 Writer-director Philip Barantini (VILLAIN) debuts at the Festival with his single-take drama BOILING POINT. The film stars Stephen Graham as a shouty angry chef who is also an alcoholic and cocaine addict. We follow him and his team over the course of a fateful night as his restaurant comes under criticism from inspectors; comes under financial pressure from Jason Flemyng's Alex; has to deal with obnoxious diners; and where his sous-chef basically has to carry the strain of dealing with his drug-driven incompetence. The result is a claustrophobic but ultimately quite obvious film where Chekhov's peanut allergy comes into play, and the end-point is also highly predictable. The shouty angry druggy chef is sadly now a trope in real life and on screen and we never get beyond that to discover why we should sympathise or empathise with him. The film is marketed as a character study but I just never felt it delivered on that score. I had no clear idea of the chef's motivations or what was driving him. And that is fatal in a move like this.

BOILING POINT is rated R and has a running time of 92 minutes.