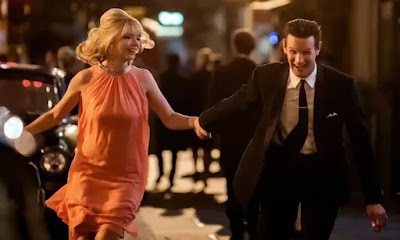 Edgar Wright (BABY DRIVER) returns to our screens with a brilliant thriller that's more murder mystery than horror film.  It stars Thomasin McKenzie (JOJO RABBIT) as a young fashion student called Eloise who is obsessed with all things 1960s thanks to her awesome grandma (the iconic Rita Tushingham). The key plot device is that Eloise can, M Night Shyamalan style, see dead people, and soon becomes obsessed with the glamorous Sandie (Anya Taylor-Joy - EMMA) who rented Eloise's bedsit decades earlier.  As Eloise lives through Sandie she experiences the exhilaration of dancing in the Cafe de Paris and being seduced by Matt Smith's charming music manager, Jack. But soon the night-time dreams become nightmares as we learn that Jack is pimping Sandie out, and watch Sandie transform from free-spirited confident young woman to a weary, angry woman who doesn't believe she's worth saving. This allows for one of the most powerfully emotional scenes in the film, set-up by many previous mirror shots where Eloise and Sandie can almost interact with each other: Eloise tries to punch through a mirror to get Sandie to look at herself/Eloise and confirm her worth.
To say more would be to spoil the plot twists carefully laid down by screenwriter Krysty Wilson-Cairns (PENNY DREADFUL) and the marketing department. What I will say is that Wilson-Cairns script is delightfully authentic in its depiction of mean girl verbal violence and more profoundly of sexual exploitation. And as with all Edgar Wright films, the use of music is exceptional. I also loved the design team's recreation of a seedy Soho that has all but disappeared now, filtered through DP Chung-Hoon Chung (THE HANDMAIDEN)'s neon lights and rain splashed streets. But most of all, this was just a really enjoyable film that genuinely surprised me - both with its satisfying plot twist AND with its thought-provoking depiction of a bright young girl's slide into prostitution.
I'm only docking it a star because of Thomasin McKenzie's inconsistent and distracting West Country accent.

LAST NIGHT IN SOHO is rated R and has a running time of 114 minutes. The movie played Venice, Toronto and the BFI London Film Festival and will be released in the UK and the USA on October 29th.

SPOILERS BELOW: This film has a REALLY clever marketing and misdirection plan. The trailer and media coverage lead us to believe it's a horror film rather than a murder mystery because Matt Smith's Jack is depicted as the bad guy. We go into the film thinking that the real mystery is whether Eloise will go mad and whether anyone will believe her when she tells them Jack killed Sandie.  My first inkling that this was not the game was when Sam Claflin turned up as a vice squad officer. Why hadn't he been in any of the media coverage or on the red carpet. Why hadn't I spotted him in the IMDB credits? Well obviously because we need to believe that Terence Stamp is the older version of Jack for the misdirect to work. And I checked. Even on the film's end credits, Sam is just listed as playing Punter number 5. Random side-note - I've long thought Claflin would make a great Bond and in his suit and slightly sixties fuller hair I was confirmed in this belief.