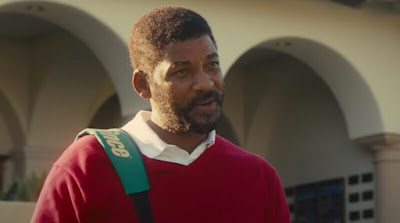 Director Reinaldo Marcus Green's KING RICHARD is an uproarious, crowd-pleasing, but not completely hagiographical biopic of Richard Williams: coach and father of Venus and Serena. The film succeeds because of a tightly structured and powerful script from first-time screenwriter Zach Baylin. It also benefits from powerhouse performances from Will Smith in the title role (taken as read) and scene-stealing Aunjanue Ellis as Richard's wife Brandi. What emerges is a complicated picture of a complicated and imperfect family that somehow, against all odds, raised a Wimbledon winner AND a GOAT.
As the film opens, Richard is trying to persuade various rich tennis coaches to invest in his daughters, who he has been raising according to his programme to create prodigies. He works them hard, both in tennis and school, because he wants them to avoid being mired in poverty and drugs like the rest of Compton. The threat of violence is ever-present.  Richard tells us how he was beaten up by white men as a kid. His eldest daughter is threatened by local gangs (foreshadowing her real life tragic murder).  We see Rodney King being beaten up on TV. So Richard's desire to create champions is commercial and callous. He clearly states it could've been any sport and that he literally bred the girls for greatness. But at a very basic level, it's not about money but sheer survival.
Which is not to say that Richard is perfect. He's clearly egotistical, stubborn, a self-publicist and a tyrant. He drives not one but two coaches mad. He drives his wife Brandi mad. And in one of the most powerful moments of the film's second half, she absolutely lets him have it with details of his life that made the audience both gasp and applaud her.  But at the end of the day, whatever he did worked.
That said, it wasn't actually just what HE did. And this film cleverly both sets up the self-made myth of King Richard before deconstructing it. Brandi powerfully argues that SHE was AS influential in raising and indeed coaching the girls as HE was, and provides a powerful role model of a hard-working black woman. As a result, this film partly cuts off one of the criticisms that was brewing in my mind as I watched it: that for a film about two female tennis stars, their three sisters, and their mum, it was kinda weird to centre the only man in the story.  The entire point is that this is what Richard does, and what the women have to fight against.
I can't say enough about how joyous this film was to watch in a packed auditorium.  Every argument, every tennis success, every tense game had us all on the edge of our seats. The film left me with an even deeper understanding of, and admiration for, these iconic sportswomen and everything that they have achieved.
KING RICHARD has a running time of 138 minutes and is rated PG-13. The film played Telluride and the BFI London Film Festival. It will be released on Netflix on November 19th.
Posted by Bina007 at 15:00