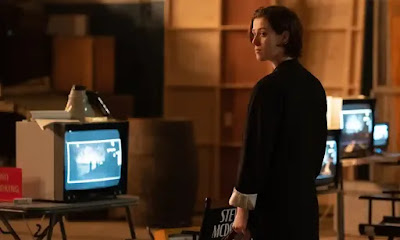 Julie is grieving the death of her charismatic, controlling, deceitful boyfriend Anthony. She doesn't know if she misses who he was or just the companionship and intimacy of love. She expresses her grief in her student film, a memorial, or Souvenir, if you will.  And in making the film, she rediscovers her sense of fun and takes joy in her friendships. We leave her still aware that she is inchoate and waiting to find her voice, but optimistic. And we leave the film, conscious that writer-director Joanna Hogg, who has created this fictionalised version of her life in this film, has indeed voice her voice with this deeply felt, technically audacious, often hilarious, film.
Viewers who have not seen Hogg's previous film, THE SOUVENIR, may struggle to understand why Julie is so driven to capture her relationship with Anthony. Without Tom Burke's dominant presence, I feared that this sequel might lose its purpose, much as Julie feels unmoored at the start of the sequel. But as the film progresses we see Julie find her way, thanks partly to her unstintingly supportive if somewhat anachronistic parents (Tilda Swinton and a drily hilarious James Spencer Ashworth). She also progresses with her student film despite her supercilious film professors, but with the support of her best friend Marland (Jaygann Ayeh). Along the way there are moments of desperation - and searching for connection - and the lightest of touches with the tragedies of the 1980s when a gay editor reveals his boyfriend has been sick for a while.  Richard Ayoade also returns with a scene-stealing turn as an arrogant film student with dip-dyed hair. The problem is that he's not wrong in what he says! Julie should move on.
But what raises this film to a level beyond that achieved in the first part of THE SOUVENIR is Joanna Hogg's greater confidence in exploring the meta-textual nature of making a film about her own student film-making. I LOVE that the student film we finally see bears no resemblance to the verite-footage we have seen so far, but leaps into Fellini or Red Shoes ballet -esque surrealism. Bravo!
I also hope that Honor Swinton Byrne continues to act. She has a natural charisma and empathy that shines through the screen. I'd love to see what kind of range she has.
THE SOUVENIR II has a running time of 106 minutes and is rated R. The film played Cannes and the BFI London Film Festival 2021. It will be released in the USA on October 29th 2021 and in the UK on January 21st 2022.
Posted by Bina007 at 20:29