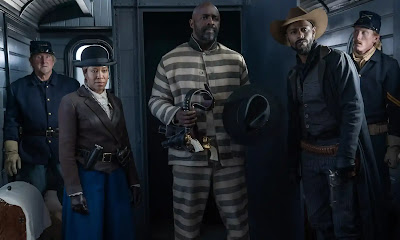 Jeymes Samuel's assured debut feature is a pastiche of Tarantino pastiching Leone, except with a largely black cast centring real black outlaws.  There's a joyous energy from seeing that kind of representation, and I respect Samuel for using his big stars - Idris Elba and Regina King - sparingly, so that we can see that next generation of talent shining through.  Special praise has to go to Danielle Deadwyler's queer outlaw Cuffee, who I would argue is the true hero of the piece, and RJ Cyler who steals every scene he's in as the arrogant, quick-draw outlaw Jim Beckworth.  Samuel also has an absolutely masterly touch when it comes to pairing action set pieces with iconic black music from around the world.  It comes as no surprise to learn that he's a multi-hyphenate talent aka The Bullits, who as well as recording under his own name, acts as a music advisor on others' films.
So what's it all about? In a prologue we see our antagonist, Idris Elba's Rufus Buck, brutally murder young Nat Love's mother and father. And so for the body of the film we are basically deep in Inigo Montoya territory ("you killed my father, prepare to die!") with Love's gang facing down Buck's gang in a series of Mexican standoffs and shootouts. There's a loosely alluded-to sub-plot whereby Buck has actually stolen all the money to finance a black-owned town called Redwood City as a safe space for black people, but he needs more money because white people are about to incorporate the state and will not honour their claims.  But this isn't really prosecuted as a plot. Rather, Samuel is more interested in cheap visual gags whereby a town full of whites is literally painted white and there's a subtitle that says "it's a really white town".
So that's the level we're on here - knowing, well-informed site gags and verbal humour.  As a result, because the film isn't trying to do something more profound, and one shoot out follows another, I did get a bit bored in between the flashes of humour. The set pieces are great - particularly one that happens on a train - but so many.  Are we gonna listen to yet another character ponderously explain their backstory before torturing another? And this brings me to a more profound question. I find it fascinating that Samuel wants to refocus our attention on real black outlaws but then doesn't really want to respect their actual stories and historical truths.  He just bunches them altogether rather arbitrarily into rival gangs and gives them a paper thin motive for their black-on-black violence. I get that it must be a liberating choice not to have to define the characters by their attitudes to mainstream white society, but it did make me uncomfortable to see a film where black people shoot other black people and leave the oppressive whites largely unmenaced.

THE HARDER THEY FALL has a running time of 130 minutes and is rated R.  The film had its world premiere at the BFI London Film Festival and will be released on Netflix on November 3rd.