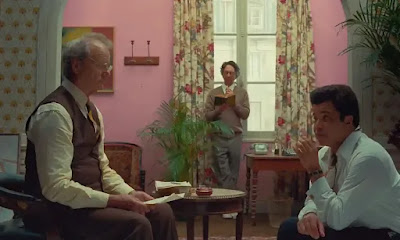 Wes Anderson's THE FRENCH DISPATCH is all whimsy and stunning design but completely lacking in meaning or profundity for all bar about 3 minutes of its running time. This gives me no pleasure to say as a great fan of his work. But the genius of GRAND BUDAPEST HOTEL was marrying his unique eye with a story that both made us life but also made us cry, and tackled the most profound and moving of subjects.  By contrast, Anderson's homage to literary magazines seems deeply unambitious and frivolous and thus uninvolving and dull. This is no doubt exacerbated by a portmanteau structure that prevents or plot character development. Indeed, this may be his worst film since THE DARJEELING LIMITED.  I wonder if he is too spoiled by being able to get every actor he wants for cameos that pile up into shagpile carpet of zanily dressed but pointless characters. He badly needs an editor and some focus.
So, the film is about a literary review editor played by Bill Murray and the magazine he created as demonstrated by three stories from the magazine brought to life. The first is a prison love story about an homicidal maniac artist (Benicio del Toro), his muse / guard (Lea Seydoux), his agent (Adrien Brody) and an art critic (Tilda Swinton).   The second is about a 1968 student demo led by Timothee Chalamet and reported on by Frances McDormand.  The third has a food critic (Jeffrey Wright) recall the kidnapping of the son of a police chief.
There are some, but not enough, laughs in the film.  Anderson flicks from colour to black and white for no real reason.  The only scene of any power is where Jeffrey Wright's critic, clearly influenced by James Baldwin, recalls how he was once arrested for being gay and the editor saved him.
Every mirror needs a dark backing so that we can see our reflection in it.  Anderson needs to bear that in mind.
THE FRENCH DISPATCH is rated R and has a running time of 108 minutes. It played Cannes, San Sebastian and the BFI London Film Festival 2021. It opens in the USA and UK on October 22nd.
Posted by Bina007 at 13:15