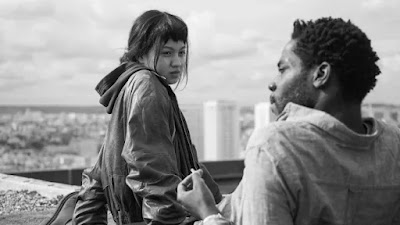 Jacques Audiard (UN PROPHET) returns to our screens with a beautifully rendered examination of modern relationships, based on Adrian Tomine's graphic novel.  The film focuses on three friends and how their love lives intersect and lead them to greater emotional understanding. The first is the Emilie, played by the charismatic breakout star, Lucie Zhang. As the film opens, Lucie is living in her grandma's apartment and leading a sex positive life. She seems carefree, strong and great fun. But as the film develops we realise that she is struggling with familial pressure to live up to her great academic career and is working a series of dead-end jobs. We also discover that despite her predilection for online hook-ups, what she really wants is a committed loving relationship with her former room-mate, Camille (Makita Samba).  Camille is also a bit mixed up, a wannabe PHD student who ends up running his friend's failing estate agent. At first he rejects the idea of dating Lucie and runs the gamut of various colleagues before discovering where he truly wants to be in life. These colleagues include Nora (Noemie Merlant - PORTRAIT OF A LADY ON FIRE). It's this final story that I found the most fascinating and daring. Nora starts off as a naive provincial mature student who ends up in Paris to restart her education. But one night she goes to a student party in a blonde wig and is mistaken for a sexcam worker called Amber Sweet (Jehnny Beth). The students bully her, she drops out, and ends up working with Camille. But as she struggles to deal with what happened to her, she makes contact with Amber and begins a friendship that is both deeply touching and surprising in its outcome.

PARIS 13th DISTRICT shows us how to portray relationships that are complicated and honest and evolve. I loved how Audiard - in contrast to Eva Husson in MOTHERING SUNDAY - used nudity and explicit sex scenes to propel character and evolve story.  Nothing here is gratuitous. Everything is honest. I felt as though I really knew all three lead characters - their flaws and their charms - and was utterly involved in how their stories would turn out. Meaningful revelations are dropped in with a very light touch - a half-heard phone-call or a camera glancing at pictures on a wall. I also absolutely loved Paul Guilhaume's stunning black and white photography that renders modernist and brutalist architecture as a stunningly vital and beautiful backdrop that made me hanker for city-life again after my Pandemic-driven suburban isolation. And Rone's electronic, award-winning sound-track is spectacular.

Overall, this is a film that pulses with vibrant real life. It makes you hanker for cities and people and serendipitous meetings that can be life changing. This is film-making at its most glorious and vital.

PARIS 13TH DISTRICT aka LES OLYMPIADES  has a running time of 105 minutes. It played Cannes where it won Best Soundtrack. It will be released in France on November 3rd but does not yet have a commercial release date for the USA or UK.