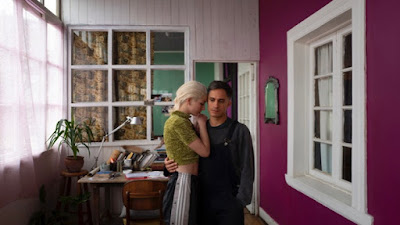 EMA is the most frustrating movie I've seen in a long time. As directed by Pablo Larrain (JACKIE), photographed by Sergio Armstrong (THE CLUB) and scored by Nicolas Jaar, this is a film of rare beauty and vitality.   The visuals are arresting, the dance scenes captivating.  For much of the film we are trained on Ema's face at the centre of the screen, contemplative, confronting.  This film looks and feels like a masterpiece.  And for its first hour I was convinced it was going to be.  Something has gone horribly wrong. The boy, Polo, that Ema and her husband (Gael García Bernal) adopted somehow set a fire on her sister, and they ended up sending him back.  Each parent is full of recrimination and they say truly brutal things to each other. Ema is also subject to outright prejudice and bullying from her work colleagues. There's something about a "failed" mother that provokes judgmental attitudes in people beyond the criticism that a father faces.  Up until this point I was fully on Ema's side. The problem is that as the movie progresses, without spoiling anything, we discover that Ema is a narcissistic, childish, reckless woman.  She didn't provoke feelings of sympathy in me but feelings of judgment, horror and fear.  All the matters is what she feels and needs - no matter how many adults or children are manipulated and endangered in the process.  And the ending of the film, which honestly is so absurd, felt as though it was rewarding this behaviour.  So you get to the end of the film and think, what a waste of so much talent and creative brilliance on a subject as absurd, unsympathetic and frankly bizarre as this.

EMA has a running time of 102 minutes. The film played Venice, Toronto and London. It does not yet have a commercial release date.
Posted by Bina007 at 07:45