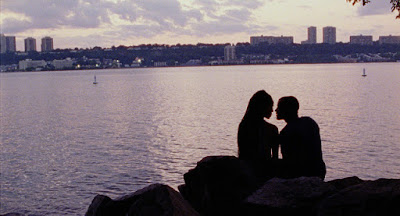 Ayanna (Zora Howard) is a naive bookish teenager bound for liberal arts college in the Fall.  But before that, her summer is upended by a chance encounter with Isaiah (Joshua Boone) that turns into a full-blown summer love-affair that - interestingly - she instigates.  He's older than her, and she loves his passion for music and ideas. She feels confident enough to open sexually and intellectually, sharing that she writes poetry.  It's intense and overwhelming, and ripe for a reality check when Isaiah's white ex-girlfriend shows up, or every time he gets into an argument with her friends over politics. The way in which both parties deal with the rift speaks to Ayanna's relative and understandable immaturity.  There's a third act twist that's beautifully and responsibly handled, and navigated, as the entire film, with real authenticity and nuance. And as we leave the couple at the end of the summer, there's a lovely ambiguity as to what will happen next.

I really was interested in the relationship, thanks mostly to Zora Howard's beautiful acting and writing. It also helps knowing she was pivotal in crafting the film alongside debut director Rashaad Ernesto Green, so that the explicit sex scenes don't come off as exploitative. But the really beautiful thing in this film is the backdrop to the relationship - our window into contemporary Harlem, in sunkissed 16mm - the way in which young people debate politics, or simply just hang out in launderettes, and the beautiful support system that young black women and their mothers have to provide for each other.

PREMATURE has a running time of 86 minutes. It played Sundance and London 2019 and does not yet have a commercial release date.
Posted by Bina007 at 16:03