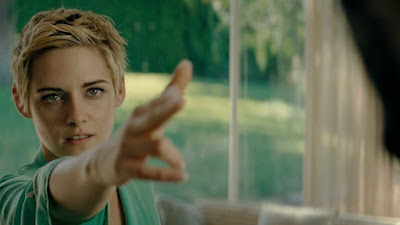 Director Benedict Andrews (UNA) returns to the festival with his biopic of the  Amercian actress who became a French New Wave icon - Jean Seberg.  The script from Anna Waterhouse and Joe Shrapnel focusses on the period in her life when Seberg was persecuted by the FBI for sleeping with and funding a "radical" black activist. What starts as a sting on peripheral people in the Black Panthers' funding circle becomes years of aggressive stalking, wire-tapping, defamation through gossip columnists - nothing less than an attempt to drive her crazy and out of Hollywood for daring to hold progressive views and sleeping with a black man.

The tragedy of Seberg's story is that it worked.  She became rightly paranoid, nervous, manic, was effectively blacklisted from Hollywood films, fleeing to Paris.  Her affair with activist Hakim Jamal was exposed - she was slandered as being pregnant with his child when she was really pregnant by a Mexican activist. The stress caused her to attempt suicide many times, and to the premature death of her baby daughter. As the film ends, Seberg has some kind of closure and reclamation. She meets one of the Feds who's been harassing her, and has the confirmation that she's not crazy. The film ends on a bravura held close-up of her reaction to this. But we know, and the end credits next to her face tell us, that she ultimately found no peace, dying in what we assume was a successful suicide attempt a handful of years later.

The resulting film has many merits. Kristen Stewart is absolutely sympathetic as Jean Seberg.  The physical resemblance isn't there, but the costume design is superb - and that's all beside the point. I absolutely believed in her as a young, good-hearted woman being driven to a breakdown by sinister forces. It's another in a line of really strong performances from her in small arthouse films that show she's really a superb actress. Last year's festival pick, LIZZIE, and PERSONAL SHOPPER before that, are cases in point.  It's gotten to the point where I now trust Kristen Stewart implicitly as a curator of my film experiences. If she goes for a project, I will assume it has an interesting subject, director, approach, and I will watch it. I can't say that about many actors.

I also liked Benedict Andrews direction and Rachel Morrison's cinematography - the film has a moody, sensual, sun kissed look, with beautiful Hollywood interiors belying the darkness at its core. And I really loved the score from Jed Zurzel (SLOW WEST) and especially the unusual song pics - not least a wonderfully melancholy cover of Tom Thumb's Blues by Nina Simone at the end.

My only real issue - but it was an issue - was with the script. I felt that the focus was too narrow. I wanted more context. Let's see the civil strife in America and why the Feds were so on edge.  Let's see the true contrast between Compton and Seberg's Hollywood.  Let's see the consequences of her affair - let's see how her colleagues react with prejudice to her sleeping with a black man - let's see her lose roles.  And let's understand more of her husband Romain Gary (Yvan Attal) - let's see why he decides to stand by her, really to the end, despite mutual infidelities and a divorce.

Let me be clear - Stewart is amazing here, and focusing specifically on her mental state is almost enough to make a compelling film, but not quite - this film could've done so much more.

SEBERG has a running time of 98 minutes. The film played Venice Toronto and London 2019. It will be released in the USA on December 13th. It does not yet have a commercial release date in the UK.
Posted by Bina007 at 09:09