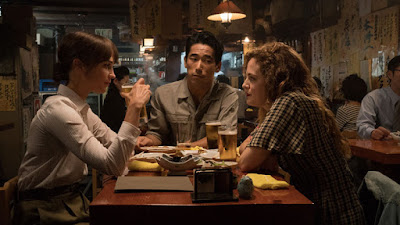 I walked into EARTHQUAKE BIRD expecting a cool, subversive, erotic thriller. What I got was a really banal, mediocre movie that I've already half-forgotten.  The problem is that it doesn't have the courage of its convictions. It's neither a high art emotional drama/character study of a woman dealing with grief and obsessive love.  Nor is it a psychological melodrama along the lines of BLACK SWAN in which a woman is gaslit and turned mad by her creepy lover.  Nor is it a straightforward schlocky 1980s thriller of the BLACK RAIN variety.  It just....sort of....is. This is a great disappointment given how surprisingly good Wash Westmoreland's last film, COLETTE, was. This very much seems like a step backward.

Anyway, what's it all about?  Alicia Vikander plays a quite literally buttoned up Westerner called Lucy who has settled into Japan and almost perfectly assimilated into the culture.  She falls for a handsome noodle cook/moody photographer called Teiji (Naoki Kobayashi). The problem is that he seems to also be attracted to Lily (Riley Keough) - a new arrival, and apparently the stereotype of a crass ex-pat.  At first, Lucy condescends to Lily but soon becomes jealous of her.  This all ends with a mysterious disappearance and a police cell, but I promise you, you really won't care.  Not that it's bad.  My goodness, Vikander seems to be speaking very good Japanese, and Keough is compelling in yet another of "sexually available" roles.  But there's no real bite here. Nothing to really hook us in.  Hugely disappointing.

EARTHQUAKE BIRD has a running time of 107 minutes and is rated R. It will be released on November 1st in the USA and November 8th in the UK in cinemas and then globally on November 15th on Netflix.
Posted by Bina007 at 21:18