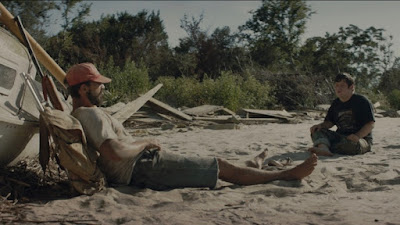 First time directors and screenwriters Michael Schwartz and Tyler Nilson have created something truly wonderful, heart-warming and uplifting in their gentle buddy road-comedy THE PEANUT BUTTER FALCON.  It's a movie that dares to be optimistic, which in these times is a) needed and b) almost subversive, as Shia Labeouf claimed in a post-screening Q&A.  What's even more impressive is that it's a film that manages to be genuinely gorgeously warm-hearted without ever feeling manipulative, especially of its down-syndrome lead actor Zack Gottsagen.  He's never patronised and absolutely shines - with a natural charisma and genuine gift for humour. What's more we get a really strong and touching performance from Labeouf - perhaps his best - and wonderful cameos from Bruce Dern and Thomas Haden Church. There's nothing not to like about this film.

Zack Gottsagen stars as a young man (Zak) sick of being patronised and housed in an old age home because the state just doesn't care enough to allow him to flourish.  With the help of buddy Bruce Dern he escapes and runs into Shia Labeouf's troubled fisherman, Tyler.  They go on the run together, and we realise that Tyler is actually a good guy, and that as much as he's practically helping Zak - teaching him to swim, getting him to the wrestling training camp and the hero he idolises - it's Zak that's really helping Tyler open up, find hope and connect emotionally.  What we get is a relationship that feels utterly authentic, and is genuinely touching. We want these crazies to succeed! Dakota Johnson has a more thankless role as the nursing home assistant with a heart who tracks them down. But Thomas Haden Church is also heartbreakingly wonderful as the faded wrestling hero who helps Zak at the end.

Like I said - there's nothing not to like about this film. It's funny - sweet - profound -  moving - and so beautifully balanced that it never falls into manipulative schmaltz. It deserves all the success, praise and awards.