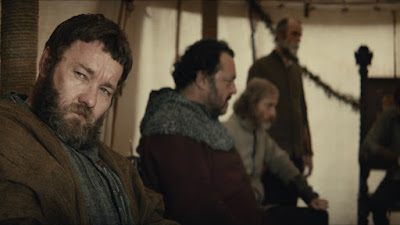 David Michod (ANIMAL KINGDOM) and Joel Edgerton (THE GIFT) have reworked the story of King Henry V to create this beautifully acted but historically dodgy version of a familiar tale.  So heavy is the reworking that I felt its being marketed as an adaptation of Shakespeare's Henriad went against the Trades Description Act.  Those looking for Shakespeare's inspired comedy, beautiful poetry, or inspiring eve-of-battle speeches will be disappointed.  Really, this isn't Shakespeare at all, other than including a character called Falstaff, who turns up at Agincourt unlike in the play Henry V.  Still, once you throw off those expectations, what you are left with is a very serious, rather earnest character study, of a young man who hates his father's paranoia and penchant for war, but ends up committing the very same war crimes on a humbug.

Timothee Chalamet is absolutely superb as Hal, with a perfect upper class English accent and a deep brooding concern as he slides into war.  For such a young, skinny boy, he's absolutely credible in single combat and on the battlefield. He is matched turn for turn by Joel Edgerton in the role of a lifetime. Falstaff steals the show as he should, but as a far quieter, more sage, noble man than in the play.  Sean Harris is masterfully manipulative as the King's adviser William, and even Lily-Rose Depp, in a small role at the end has a very contemporary feminist gravitas.  The only bum note is Robert Pattinson as the dauphin, so camp and shrill as to be in another film entirely.  It's also clear that the team behind the film don't really know much about medieval warfare, in terms of when and how armour and weaponry is used. That said, they did successfully convey Falstaff's battle tactics in action.

Overall, this really is a compelling film, full of strong performances - maybe Chalamet and Edgerton's best - wonderful cinematography and a subtle score from Nicholas Britell. It deserves to be seen on the big screen rather than on Netflix's streaming service and I hope they give it a decent theatrical roll-out.

THE KING has a running time of 134 minutes and is rated R. It played Venice and London and will be released by Netflix on November 1st.
Posted by Bina007 at 13:09