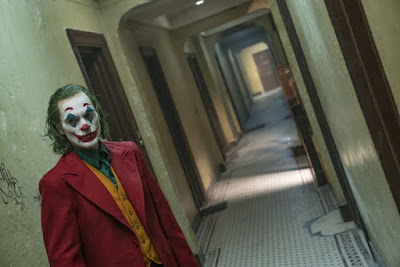 JOKER is such a hyped movie - both positive and negative - that I felt I needed to watch it and form my own views before I drowned in the commentary.  I also recognise the irony in me now adding to that cacophony of praise and outrage.  But for what it's worth, these are my thoughts.

Todd Phillips has - with his production designer and cinematographer - created a really evocative view of late 70s/early 80s pre-Giuliani New York.  His Gotham City is full of filthy streets, piled-up garbage bags, sleazy sex shows and petty crime.  There's discontent and inequality. Thomas Wayne is proposing he fix the mess, bringing his business acumen to bear as Mayor, but he's not the shining beacon of decency we've come to expect.  He has little sympathy for the "clowns" who haven't managed to make anything of their lives.

In the midst of a city on the edge, we find Arthur Fleck. A mentally ill man who has delusions and narcissistic personality disorder. He also has a kind of Tourette's where he laughs at inopportune moments.  He works as a clown, and aspires to be a stand-up comedian, but he clearly has no gift for comedy, or even simple human relationships. Beaten up; dismissed from his job; feeling abandoned by his father; and mocked by his hero - a late night TV show host, Arthur snaps. But his violence isn't the anarchic chaos of Heath Ledger's Joker. Rather, it's targeted vengeance at those he thinks have wronged him. Twice in the film he has a chance to kill people who have been nice to him and he doesn't.  So his mental illness does not exculpate him from charges of murder:  he very much knows right from wrong and chooses to cross the line anyway.

Joaquin Phoenix is superb in the role of Joker, although his career best remains in THE MASTER. He physically transforms - losing weight, making himself small and twisted, showing us a desperation and anger - a desire for connection and adulation, and an anger that the world simply doesn't "see" him.  Robert de Niro is also good as the late night host: in a  final confrontation with Joker he is admirably cool, perceptive and interrogatory, asking the questions and making the points that the audience might well want articulated. I certainly did.  But the other characters are very thinly written. Poor Zazie Beetz has very little to do as the Joker's neighbour and purported love interest. Similarly Frances Conroy as Joker's mum has little to do other than deliver a single brutal line.

No, this is very much Phoenix's film. And at times I found that claustrophobic and actually a tedious. I think Phillips wants it to be claustrophobic He wants us to be immersed in the Joker's head.  But I just didn't want to be there. I found it (rightly) uncomfortable. The fundamental structural issue with the film is therefore, for me, that Phillips has made Joker the protagonist, and therefore wants us at minimum to understand his descent into violence, and at most to empathise with it. And I don't want to empathise with it - I find it almost irresponsible too - and therefore I also didn't want to spend time understanding it.  I felt Robert de Niro spoke for me when he accused Joker of just making excuses.  Yes life sucks for him, it sucks for many, we don't all shoot people.

There's another structural issue in this film: the unreliable narrator. I quite like a good unreliable narrator drama, but I felt this was so obvious and heavy handed as to be patronising.  I know Joker is imagining his relationship with his neighbour, I don't need Phillips to show me this in flashback scenes that cut between Joker with her and without her.  I also think you get to a point where you start doubting everything.  Did Joker really dance on the car bonnet for his radical minions at the end? Or was he just driven straight to the asylum?  Is Bruce Wayne really a shit and is Gotham City really so grungy or is this just Joker's projection?  Was Joker's mum really delusional or was she actually just gaslit by Wayne?  There are so many of these choose-your-own-interpretation moments that at some points it all just collapses in on itself, and I found mysel not caring. In the words of one of my friends, mocking this unreliability, "Maybe Joker just commits suicide in the fridge and everything after is just a dream".

My final major issue with this film is the same one I had with Noah Baumbach's MARRIAGE STORY.  I get that great directors are cineliterate and inspired by the greats of history. But simply to recreate an iconic style from a single past director isn't enough. Baumbach makes a great late 80s Woody Allen film.  Phillips had made a great mash-up of TAXI DRIVER and KING OF COMEDY. But it isn't enough. In his interpretation of Batman, Christopher Nolan took all that cinema history and added his own originality to make something truly pioneering. Joker features a great performance and great design, but it just isn't that.