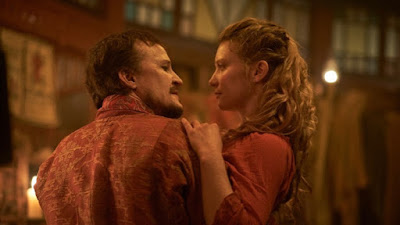 Debut writer-director has created something really wonderful in her strange fable JUDY & PUNCH. It's set in a vaguely medieval world but reminded me a bit of Neil Gaiman in its ability to comment on contemporary issues through the lens of fantasy.  I loved its wit, its intelligence, and its ultimately rather wonderful message about the wisdom of women and outsiders.

The film stars Mia Wasikowska (ALICE IN WONDERLAND) and Damon Herriman (ONCE UPON A TIME IN HOLLYWOOD) as the eponymous puppeteers, whose theatrical show is the deeply politically incorrect one from our youth. The puppet Punch beats up his wife Judy, and the policeman who comes to break things up, and the dog who tries to steal his sausages.  Charming! And amazing that this was still considered acceptable children's entertainment in my childhood. The plot turns on Punch being violent in real life too, and apparently murdering his wife in a rage. But she's rescued by outlaws who turn out to be just a bunch of skilled people who caught the suspicion and paranoia of the bigoted villagers.

It's truly wonderful seeing the submissive but talented Judy come into her own and discover her power as the film progresses. It's also wonderful to see Punch portrayed with empathy if not excuses. He's a deeply frustrated man and an alcoholic. As the film progresses one sense that he actually does love Judy - just not as much as he loves himself.  And in the wider depiction of the village, there's something darkly funny but also desperately sad about how it seems to get a certain kind of political madness that has infected our times.

The beauty of this film is that it never lets the message overwhelm the characters and the plot.  This isn't an allegory but a character-led, moving story.  Moreover, it features a really powerful performance by Herriman which at times evokes Heath Ledger's Joker.